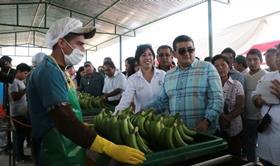 The first commercial production of organic bananas has got underway on land forming part of the Olmos Irrigation project in northern Peru.

A group of 78 small producers planted 100 ha in October last year as part of a pilot project to grow organic bananas for the European market.

The fruit was harvested in July and is being packed for shipment to the Netherlands, from where it will be distributed in Germany, Belgium, Switzerland and Italy. It is hoped that production will eventually reach 400 ha.

Officially inaugurated by president Ollanta Humala in November 2014, the Olmos Irrigation Project diverts waters from the Atlantic-based Huancabamba river into the Pacific basin via a 20km tunnel through the Andes for use in the irrigation of arable land and power generation.

The first stage of the project creates 43,500 ha of irrigated land and could generate up to US$1bn in agricultural exports in the coming years, creating some 40,000 direct jobs.

Table grapes, avocados, berries, mangoes, citrus, pomegranates, asparagus and peppers are among the fruits and vegetables that are being produced on the land.