Opinion: What is going on at Tesco? 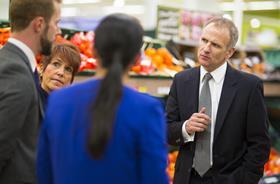 Tesco boss Dave Lewis' big shake-up of the struggling supermarket has hit the company balance sheet. The company reported a pre-tax loss for the year of £6.4bn – one of the biggest in UK corporate history.

To be fair, a lot of this was one-off charges: a fall in the property value of its UK stores (constituting about £4.7bn), paying to fill holes in its pension scheme, restructuring costs, stock readjustments and exiting the China market. There were actually some small signs of recovery with a slowing in the decline of falling sales volumes.

But Tesco still needs a lot of work. Trading profit slashed, market share falling, no final dividend and a potential catalogue of challenges, complaints, possible court cases and investigations all point to a fraught future. Just as well market share is only 28 per cent and trading profit was only £1.39bn.

So how did it get to this?

Tesco has been hit by a structural realignment of the UK grocery market. New entrants at the discount end have proved to be fierce competitors, especially at a time of recession. New technology has changed shopping habits (the advent of online shopping, for example) rendering the past little guide to the future. Consumers have fallen out of love with the biggest out-of-town stores and are now looking more often to local and convenient stores that fit their daily patterns and lifestyles.

The ill-fated forays into the US, Japan and China have also cost time and money. In the UK over-expansion has cost the company dear; market share has been stagnant since 2007, despite Tesco adding lots of floor space. Accounting scandals and an over-reliance on supplier contributions have added to a sense of an overcomplicated business in a world that wants simplification and solutions.

Dave Lewis’ inherited problems have been some time in gestation (he only took charge in October 2014), so in meeting his stated three priorities– regaining competitiveness in the UK core business, protecting and strengthening the balance sheet and rebuilding trust and transparency – he will have to be given time. The figures today recognise the start that has been made, and focus especially on the steps to strengthen the balance sheet. Trust and transparency will take more time to rebuild and will only be seen through future actions and behaviours.

The route to redemption

In terms of regaining competitiveness in the core UK market, there are six steps Tesco can be getting on with to turn things around:

1. The store estate is too large and elements of it are unprofitable. Announced closures and the abandonment of planned developments have begun this process of portfolio review. But more needs to be done to rethink the scale and shape of the store network. It is not as simple as large = bad, small = good. Though this is the trend, a focus on better sites for the smaller stores will be essential.

2. Operating costs need to be realigned and reduced further. Again, steps have been made to start this with the closure of the Cheshunt head office and other reorganisations at management and store level. Tighter control and further focus on this will be needed.

3. Cost-cutting has to be aligned with a better in-store offering. There has been investment in putting more staff in stores and especially in customer-facing roles. More staff with a clearer idea of what Tesco is about should provide a better service and feel for customers.

4. Product ranges are being rationalised – and there is still some way to go on this. A stronger relationship with leading suppliers and a reduction of the clutter of brands and private labels in some categories will see a larger and more focused (and cheaper) offer on key products for customers.

5. A focus on the UK core business also means that questions are being asked about some of their activities. Blinkbox and Tesco Broadband have gone already, but could they sell others, including Dunnhumby (the people that designed and analyse the Clubcard) and bring in a substantial amount of cash? Acquisitions that strengthen the core offering are important too and Tesco have just completed the purchase of the upscale Euphorium Bakery.

6. Putting all these together shows the need to simplify the business across the board. Scale brought benefits, but also added complexity – which has proved something of a millstone. Scaling down will enable UK stores to be clearer for the customer, have a stronger focus on key elements of the product range and price, more focused promotions and advertising, but also with added value sections (coffee shops, Euphorium bakeries) where appropriate.

This is not going to be a quick fix – and there is likely to be more pain to come but, for the first time in a few years, there is a sense of clarity as to what is being attempted. The question is whether the British consumer will see, value and patronise the new approach in sufficient numbers and with sufficient spending?

This article was originally published on The Conversation. Read the original article.