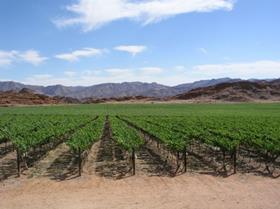 Growers in the Orange River Valley, South Africa’s major early-season region, have started harvesting Early Sweet and Prime Seedless over the last week, with increased volumes to be shipped through Cape Town over coming days.

Growers are pleased with the early season quality and expect a good season if the present conditions continue.

“We expect to fulfill the SATI forecast of between 21m–24m cartons from the Orange River,” says Alwyn Dippernaar of Dippenaar Choice Fruit, located at Blouputs below the Augrabies Falls.

Industry association SATI estimated that seasonal shipments will reach between 70.6m and 77m cartons (4.5 kg equivalent) over the 2021/22 campaign.

“The mid-point is estimated at 74.2m cartons, which is close to the volume packed during the 2020/21 season,” said SATI.

An increase in export volume is expected, despite the 2021 vine census indicating a decrease of 536ha on the planted area in South Africa.

Dippenaar said growers in the Orange River have been converting to new high-yielding varieties.

“We are slowly moving to firmer, better tasting varieties, which also perform well in our region,” he said. “Among them are varieties such as red seedless Sweet Celebration, Sweet Globe and Allison.

“There are several others doing very well and increasingly we will be delivering more exceptional grapes into the market which can complete with any other supplying country.”

Choosing new varieties can be somewhat of a lottery, according to Dippenaar.

“We often have to replace vineyards before we even break even because varieties which promise much, often just do not perform in our area,” he said. “Slowly we are focusing on a range of excellent varieties and we are now in a much better position than a few years ago.”

Growers in South Africa’s northern regions and the export industry in Namibia have been shipping their grapes for about two weeks.