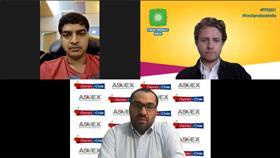 India is a market with enormous potential. It’s population of 1.36bn is surpassed by that of China’s, and there’s growing reason to believe the market could follow a similar upward trend.

Attempts to grow the pear category have struggled, mostly due to the variety. Then South Africa entered the picture.

“They produce the right varietals, and they have a good supply window. The issue facing South Africa is logistics and getting the protocols right. Shipping issues have been a nightmare,” he added.

“We’re pushing hard to go back to the ITCT. That will be our big focus point. If we can solve that, it’ll be so much easier to get pears to India,” he explained.

The success of Vermont Forelle hasn’t been by chance, as Du Preez explained. “We have spent a lot of money and time researching this specific cultivar, to the point we’ve perfected the growing and post-harvest treatment. It’s designed for the Indian market and other markets in Asia,” noted Du Preez.

“Our current budget includes substantial money so we can invest in promoting South African apples and pears in India. Our next step is to identify the service provider.”

Cherries find a home in India

The cherry category is another to have rapid growth in India. As recently as five years ago, only the wealthy upper class could afford the fruit.

But all that has changed. Increased domestic production has opened the door for international suppliers, namely Chile and the US, and the marketing campaigns associated has seen the fruit grow in popularity among the middle class.

While it remains a ‘premium product’, this movement is likely to see greater opportunities for cherries in India.

“Shipping anything to India from Chile has always proved a major challenge,” said Carvajal. “Thankfully our exporters have experience working in other markets with a similar distance, allowing them lean on that experience when getting cherries into the Indian market quickly.

“We will look to strengthen our presence over the coming years, and we plan to undertake tailor made activities for larger retail distributors in India.

“Chile has a very good history with India,” added Carvajal. “We’re in a good position to seize the opportunities in India in working with our existing trade partners.”

Natarajan says much of the category’s newfound popularity is down to the way the fruit is marketed and the change in consumer mindset.

“People have started prioritising health, they want to eat healthier food. It’s the same reason why there’s been a huge growth in kiwifruit,” he explained.

“Cherries, although considered a premium fruit, have many health benefits and that’s how we’ve been promoting the fruit this year.”

A key aspect of promotions, according to Natarajan, is providing samples of the fruit to Indian consumers.

“Sampling is a major part of promotions. That’s been the best way to get an immediate response. Once they taste it, they tend to buy it,” he explained.