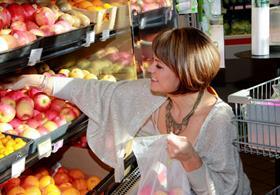 Shoppers like Ali Vincent, the face of Pink Lady America, will be able to bag the apples earlier than before

Pink Lady America has confirmed it is adding five new varieties to its roster of Pink Lady-branded apples, opening the way for the branded apple’s new-season fruit to hit stores up to two months earlier.

Barnsby, Maslin, Rosy Glow, Ruby Pink and Lady-In-Red (if under license) will now be included in the Pink Lady trademark agreement, meaning that they mustg now be sold branded store signage to avoid confusing consumers.

“This is great news for the consumer,” commented John Reeves, general manager of Pink Lady America. “It first points to the assurance of natural improvements in this apple to be seen in future seasons.

“This is also a very positive move for produce merchandisers who may be wrestling with the identification to be put on a display holding Pink Lady brand apples. There is no decision to be made, it needs to be Pink Lady.”

The inclusion of other varieties under an apple brand name is not new, Reeves suggested.

“The major difference here is the involvement of a trademark name along with a brand promise with specific quality requirements in that promise that are focused on those varieties,” he explained.

“So, this becomes yet another reason for those in the apple industry and at retail to be supportive of trademarked fruit in the future. It’s all about product improvement and related quality assurances.”

As a result of the development, growers, produce merchandisers and consumers can apparently expect to see better availability of Pink Lady apples, with fruit set to arrive in stores much earlier in the season.