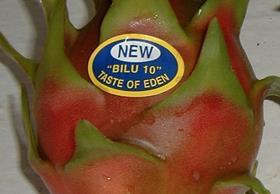 Israel’s Yossi Zaphrir has just celebrated his 91st birthday. A moshavnik who owns and works on his smallholding, Zaphrir previously worked in the Ministry of Agriculture and then in the agricultural trade, as Agrexco’s representative in the Netherlands for a number of years.

On formally retiring in 1990, Zaphrir turned his attention to pitaya, and he has since been at the forefront of varietal development via hybridisation in this field.

In Israel, the generic name, “pitaya”, is used over the term dragonfruit, which is used for the white-fleshed fruit from Vietnam. The fruit originated in Mexico and was taken to Vietnam by French priests.

The Israeli varieties – the Bilu series distinguished by their pink/purple flesh and sweet taste – have been developed by Zaphrir, owner of Top Eden Fruits. Also available is the Venus series with their red flesh and a less sweet taste.

In Israel, there are two seasons for pitaya cultivation. Harvesting and marketing of the summer crop (based on the Bilu clones) starts in June and finishes in November/December. The winter crop – based on the variety Desert King – becomes available between December and March.

Varieties are constantly being improved with regard to taste and nutritional value (above all vitamin C and antioxidants). During the summer, the produce shelves have abundant supplies of fresh fruit of all kinds, whereas in the winter the pitaya offers a readily available fresh fruit when there are fewer alternatives.

In recent years, Zaphrir’s work in varietal improvement has focused on various problems inherent in the pitaya category, with the primary aim of reducing manual labour and thus cutting production costs.

- developing clones with earlier flowering to catch the early season and extend the season;

- elongating shelf-life post-harvest so the fruit maintains quality after 2-3 weeks in cold storage;

- identifying clones that have specific peaks of flowering, to eliminate production “waves” and deliver consistent availability of fruit for harvesting;

- and reducing the need for hand-pollination, thus greatly cutting production costs. New clones have been identified in nature that self-pollinate and these are being used in breeding new crosses.

Israel grows approximately 60ha of pitaya, 10ha on Zaphrir’s farm, with the Bilu series being exclusive to Top Eden Fruits. For summer varieties, it takes around 40 days from pollination to fruit production, whereas the time required for winter varieties is closer to 80 days. From a large number of crosses, Zaphrir is now moving forward with 10-15 selected hybrids.

Since Covid-19, various export restrictions have meant that local demand for pitaya in Israel has been buoyant, reducing the quantities available for export, despite constant demand from the UK, Spain and the Maghreb.