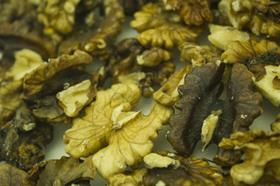 The intense rainfall that fell last weekend has had a major impact on Chile’s walnut production, in particular the late season Chandler variety, says the grower and exporter association Chilenut.

Chilenut president Juan Luis Vial said as a consequence of the rain, some exporters would be unable to fulfil their export requirements, particularly in light coloured and halved nuts.

The association is helping producers to carry out more accurate loss assessments.

Vial warned that another weather front is expected this weekend, although this was likely to be weaker, allowing producers to harvest the remainder of their crops.

Chile’s walnut production has risen steadily since the start of the decade as a growing number of producers switch to more water-efficient alternatives to traditional fruit crops.

In 2015 exports totalled 32,300 tonnes of walnuts and the country now accounts for 63 per cent of the shelled walnuts imported into Europe and is the biggest supplier to Russia, Italy and Brazil and second biggest exporter to Germany and South Korea.