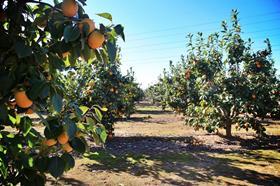 From the start of the campaign in October to the end of January, more than 113,000 tonnes of protected designation of origin (PDO) fruit was exported and a record 4,600 tonnes – double the 2017 volume - was sold in the UK.

This comes as a huge relief for the industry after disastrous 2017 and 2018 seasons, which were hit by frost and hailstorms.

The Kaki de la Ribera del Xúquer regulatory council, which governs its PDO status, has reported that this year’s growing conditions resulted in the usual high quality and size expected.

“This has been a very promising season for us,' said Rafael Perucho, head of the council. 'We have a strong relationship with the UK retailers and sales are increasing year-on-year. The persimon is becoming increasingly popular with UK consumers and I can see it evolving into a seasonal fruit.”

The fruit's PDO status ensures it is the rojo brillante variety and has been grown in the Ribera del Xúquer valley region where it was first discovered; and also that the fruit comes from growers that have passed a series of checks on aspects including traceability and quality of the persimon they supply.

The regulatory council and Foods from Spain have been working together since 2005 to promote the fruit to the UK market.

The campaign was on hold in 2018, due to the difficult season, but 2019/20 saw activities such as trade and consumer advertising, recipe videos, social media, print and digital features and press gift boxes.

The aim of next year’s campaign is to continue to create awareness amongst the UK consumers and trade about the quality and unique benefits of the persimon.

“We hope to increase our reach in the UK and for our label to be widely recognised for taste, quality and versatility,' Perucho added.