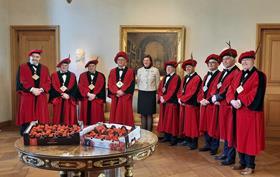 Belgian cooperative Hoogstraten has ushered in its new strawberry campaign by presenting the first of its new-season fruit to the country’s monarch, King Filip.

The presentation, which was the first ceremonial season opening in two years due to the recent lockdowns, took place.on a visit to The Royal Palace of Brussels.

Grown by grower Luc Krijnen, the first strawberries were presented, as tradition dictates, by a brethren of strawberry ambassadors known as the Ghesellen van de Aardbei.

They were gratefully received by Nancy Monteyne, the king’s deputy chief of protocol.