Russia-Ukraine: market disruption on the way 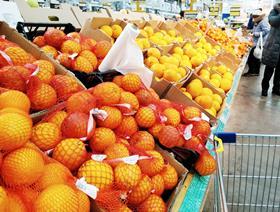 Citrus on display in a branch of Lenta in Kemerovo, Russia (Photo: Alexei Poselenov)

The loss of two major markets for fresh produce in Russia and Ukraine is set to have an adverse impact on fruit and vegetable markets elsewhere in the world.

“Our business challenges are futile compared to the struggle of the people in Ukraine,” he was keen to point out, before he went on to assess the impact on the business itself.

“As we are following the developments by the hour, we currently do not load to Russia due to the bank situation,” he noted. “[For] Ukraine unfortunately we can’t load – realising the food shortages in the country add to the existing nightmare the people are in.”

How long produce shipments to both countries will be prevented remains open to question, suggested Hoogendoorn.

“I wish i could predict the future,” he continued. “It all depends on the obvious factors, and the duration of the conflict. We do think that it will have an effect on the volumes and prices on other markets. That being said, we need Russia for the bigger sizes of fruits and of course EU allows only blackspot-free [citrus].”

Global Produce grows, harvests and packs its own table grapes, citrus, stonefruit and pears, and supplies them to its customers – including strategic traders in the UK, EU, central and eastern Europe, Russia and Canada.

In addition, it complements its own production with fruit and vegetables procured from around the world.