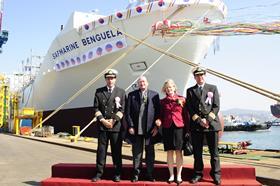 The Safmarine Benguela, the second of two new 3,100 TEU containerships to be delivered to Safmarine in 2009, was named in Korea today.

The vessel was named by its Godmother, Ms Elke Conrad, wife of Jörg Conrad, owner and president of the Bremen-based freight forwarding company Anker Leschaco Group.

The name of the new container vessel – which will be deployed on the Europe-South America service - was inspired by the Benguela current, which flows along Southern Africa's West Coast.

Meanwhile a carbon tracking project conducted by Safmarine in association with one of its leading South African clients, Colorsfruit, has delivered some surprising results during the first phase of the project.

“From a Safmarine point of view, we were particularly interested in the contribution of the shipping leg, and were surprised to see that the 'per unit' contribution was lower than expected,” says Russell Gillespie, Safmarine's customer service executive for Africa.

Mr Gillespie says the Colors Carbon Project is important because it aimed to remove the myth and mystery by measuring, accurately and credibly, the carbon footprint of a unit of fruit produced in South Africa and shipped to the UK.

The project considered the life-cycle of fruit (including grapes, citrus, stone fruit and top fruit), from how it is farmed in South Africa to how it is received by the importer in the UK, taking into account the contribution of packaging, energy use, transportation and many other factors.

“The Phase 1 results showed that, in general, packing and production contributed more to the carbon footprint than the entire long-distance shipping leg. For example, in the case of apples and pears, the results show that shipping accounts for less than 15 per cent of the total emissions across the supply-chain, while the production and packing phases account for 22 per cent and 47 per cent respectively.'

David Farrell, director of group strategy for Colors Fruit Holdings, says the project has achieved the credibility which was aimed for. “The Phase 1 results have been audited and certified by the Carbon Trust and the British Standards Institute,' he said. 'The project has also contributed to the development and application of the BSI's PAS2050 standard for the assessment of greenhouse gas emissions.”

He added: “Now that we have completed Phase 1 - and know what the carbon footprint is of a unit of fruit - we can focus on reducing that footprint and doing so in partnership with the various stakeholders in the supply chain.”