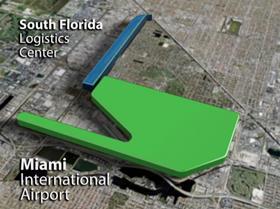 It’s almost a year since South Florida Logistics Centre opened for business and Chris Scott, president of Flagler Global Logistics, which built and operates the centre, is pleased with the progress made in that time.

“One of the bigger challenges we faced as the new kid on the block was changing the mindset of an industry that relies on routine,” explained Scott. “Perishables enter through the north because that’s the way it’s always been, thanks to its cold climate.”

Even having to overcome that logistical paradigm, Scott says SFLC has really made strides carving out a fair amount of business from South American growers. “Using the centre can help them get their produce to market faster and fresher, in large part thanks to our geographic proximity and the centre’s patented cold chain treatment process,” he continued.

To date, SFLC’s coldstorage facility has been a gateway entry point for Chilean blueberries, grapes, and apples; Peruvian asparagus and avocados and Brazilian ginger.

And demand will almost certainly take off following the completion of the Panama Canal expansion project next year. “PortMiami is the first and closest US cargo port of call to the Panama Canal so it stands to reason that the port will benefit economically by capturing some of the increased volume of goods that will pass through the canal once expansion is complete,” Scott notes.