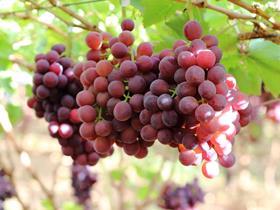 Much has been written about the dramatic change in the South African table grape industry. No other variety demonstrates this more than the growth of Tawny Seedless – an early red seedless variety which is now the fourth most-planted table grape in the country.

Although the late season Crimson Seedless will for some time remain the leading South African table grape variety, and to an extent dominate the South African season, Tawny Seedless has now taken over from Flame Seedless, which since early 1990, had been the most popular early red table grape.

Tawny Seedless was developed by Lombardi Genetics, based near Mokopane in the Limpopo Province, in the north of the country.

It is a real South African home-grown variety and of particularly high importance for growers in the north where it has been developed. It is also grown all over the country.

The owner is André Lombard, whose farms at Mokopane and in the Loskop Valley in the northern region make a significant contribution to that area of the country.

Lombard planted his first vineyards in 1991 and recalls that originally, only Flame Seedless, Sugraone, Red Globe and Dan-ben-Hannah were available to growers in the north.

“We wanted to get into breeding to find our own varieties, because elsewhere there were only Regal Seedless and Sunred Seedless available,' he said.

In Tawny Seedless, the Lombardi Genetics programme is already producing success, with a number of other varieties tried and tested in the north being either released or in the pipeline.

Established in 2002, Lombard runs his breeding venture as a boutique plant breeding company. He says varieties go through a vigorous testing and evaluation process before being released, with the philosophy of 'by a grower; for a grower'.

“With superior eating quality and aesthetic appeal being a given, we focus on providing grape growers with fertile, durable varieties that are labour friendly and resistant to cracking after rainfall,' he said. ' We believe that the grower's success is the start of a sustainable supply chain.”

Tawny Seedless, with around 1,000 hectares already planted, is popular in all the country’s growing regions and in Namibia.

“We are excited about Tawny’s success so far because it is a very friendly cultivar for growers to work with and has low input costs,” says Janine Lombard of Lombardi Genetics. “In demanding seasons with difficult climatic conditions Tawny is still very much resistant to berry burst, more so than Flame Seedless which is its competitor.'

Tawny’s success seems to be only the start for Lombardi Genetics, with two more red seedless varieties in the pipeline.

“Royal Bloom (Lombardi 51) is a mid-season variety which opens in the early Crimson Seedless period, as well as Carmine Crunch, which is a Crimson type grape which should do extremely in areas vulnerable to rain, because it is resistant to cracking,” she continues.

A telling factor about the planting of new varieties is that around 8m vines of new varieties, or more than 4,000 hectares, have been planted with varieties with is still listed as ‘other’ – meaning that they have not yet been fully commercialised or named. That is nearly 20 per cent of all the table grapes planted in South Africa.