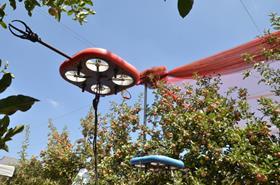 Among the investors in this round were two major Asian agriculture equipment manufacturers; Japan’s Kubota and China’s Forbon.

Participating alongside them were a host of venture capitalist firms including Maverick Ventures Israel, its compatriot OurCrowd, and US-based AgFunder.

Tevel has designed a system of small, interconnected drones that can harvest orchard-grown fruits and carry out other tasks, such as pruning, trimming, and thinning, that would typically require human labour.

Harvest labour is in increasingly short supply due to Covid-19 restrictions. The UN’s Food and Agriculture Organisation (FAO) has estimated the availability of orchard workers to have dropped by 50 per cent over the past two decades – while agricultural fruit output has doubled over the same period.

“The situation in orchards is worse than in greenhouses, for a few reasons. Fruit season in the orchard is shorter than for greenhouses and orchards are mostly located in remote villages [where] the local labour is not available, and the imported labourr is not sufficient,” he told AFN.

“Tevel supplies autonomous harvesting on demand – anytime, anywhere, any capacity. Our flying robots gently pick the fruit without bruising it [and] they almost don’t leave any fruit on the trees.”

Tevel’s solution — named Flying Autonomous Robot (FAR) — is a mobile hive of drones, each equipped with a meter-long mechanical claw and AI-powered ‘eyes.’

Beyond picking, this potentially allows FAR to perform “any intensive selective task that requires accuracy,” according to Moav.

“Our robots have excellent manoeuvrability – they can manoeuvre with six degrees of freedom. This enables us to pick almost all the fruit from trees, work with different orchard architecture — such as thick and thin trees, trellis systems, and round trees — and to pick many kinds of fruit with the same hardware.”

“This can bring extra 10 to 20 per cent of fruit to the same farm – which is not only more revenue, but extra profit to the farm.”

Tevel will use this latest funding to complete product validation, commence production, and launch its commercial service.

Some of the capital will also go towards the establishment of operational bases in Israel, Europe, and North America. Moav believes FAR will be fully available to farmers by the end of 2021.

“For the average orchard, harvesting can represent 50 per cent of the operating costs, a figure that increases in correlation with farm labour scarcity. The versatility and efficacy of Tevel’s FAR will change the way orchards operate globally,” AgFunder founding partner Michael Dean told AFN.

Forbon chairman and chief executive Renzong Wang said in a statement that “the market opportunity [for FAR] in China is enormous.”

“China is the largest fruit producer in the whole world [but the] agriculture labour shortage already puts China in a very difficult situation, and it will become even more severe over time,” he said. “The industry desperately needs a feasible solution like Tevel’s.”

This latest US$20m round is the third that Tevel has raised following its US$10m Series A in 2019 and a US$1.4m seed round in 2017. It has also banked a US$2.5m grant from the Israel Innovation Authority.