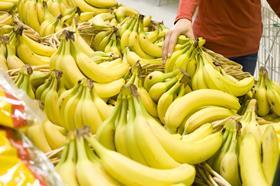 Banana production is becoming increasingly difficult as the number of chemicals available to growers is reducing, Fischer said. He added that organic production was also getting harder.

Fischer continued, saying that the growing number of private banana labels and sustainability certificates in the European retail market is leading to confusion and insecurity among consumers.

“Certification numbers need to be reduced to help consumers in their decision-making,” he said.

Bananas rank second in the top ten fruit consumed in most European countries, after apples, Fischer added, and account for 8-14 per cent of supermarket fruit turnover.

“Bananas are still number one in [retail] price promotions, although these do not tend to lead to increased sales volumes,” he said.