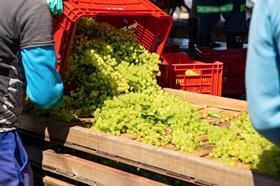 The South African raisin industry has reported on continued growth at the end of the 2021 season, despite climatic challenges.

Regardless of limitations faced by the industry, export volumes of South African raisins to the UK are up once again over 2020, which in itself saw a huge increase compared with 2019.

The Orange River region, where 88 per cent of the country’s raisins are produced, experienced between 80mm and 170mm of rain at the beginning of last year.

These conditions were exceptional for the Northern Cape, which usually experiences average temperatures of between 33-38oC during harvest.

Strategies were put in place at farm level to mitigate the impact of the rains on the crop, such as canopy management and constant monitoring of the situation.

“From a grower perspective, climatic conditions for the past season did not provide for optimal growing conditions,' said Ferdie Botha, CEO of Raisins South Africa. 'Conditions were constrained in the Orange River valley initially by frost and cold weather conditions, which perhaps negatively impacted more than initially anticipated.

'Furthermore, the Orange River came into flood and restricted access to some growers, along with above average rainfall, and required changes in production practices to minimise the impact,' he added.

The Olifants River valley in the Western Cape, however, experienced excellent growing conditions, particularly for currants.

Another product that was also less impacted by the rains, was the SA Sultana, formerly known as the WP raisin.

Raisins South Africa relaunched the variety this year after the gradual increase in production volumes and as part of the diversification of its product range.

The industry body has now focused its attention on 2022 and is optimistic about the season ahead.

The UK promotional campaign will once again concentrate predominantly on evolving connections with B2B and trade contacts, as well as communicating the benefits of South African raisins to consumers.