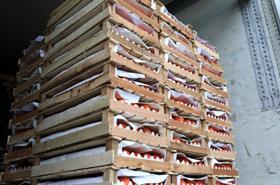 The European Federation of Wooden Pallet & Packaging Manufacturers (FEFPEB) has expressed its sympathy and support for the people of Ukraine, and advised that the conflict could cause significant pressure on the supply of wood, and therefore pallets and packaging, in the coming weeks.

Last year, Ukraine exported more than 2.7m m3 of sawn softwood timber, a significant amount of this for wooden pallets and packaging manufactured in European markets including France, Germany, Italy, the Netherlands and Poland.

The country also produced and exported an estimated 15m pallets, mainly to Europe.

The severe slowdown in the Ukrainian economy and stop in production would have serious direct impacts on countries such as Hungary, Italy and Germany (the three most prolific softwood importers from Ukraine), FEFPEB noted.

It could also an indirect impact across Europe by unbalancing the market and increasing competition for more limited wood supplies and putting upwards pressure on prices.

Meanwhile, with Russia exporting approximately 4.5m m3 of softwood timber into the EU (with Estonia, Germany, Finland the largest importers) and Belarus exporting approximately 3.1m m3 (spruce and pine combined), Europe would be 'significantly impacted' by trade sanctions that had been introduced against the two countries, FEFPEB outlined.

The federation added that it supported the trade sanctions against these countries.

Some countries source up to 25 per cent of their pallet and packaging timber from the three countries. Alternative timber sources including Scandinavia, Germany and the Baltic States were only capable of covering a small proportion of the shortfall, it said.

Energy supplies had also been severely disrupted, FEFPEB highlighted, increasing the price of fuel, with growth in the price of petrol of more than 30 per cent, and the cost of a barrel of oil now more than US$110.

The above challenges have added to existing pressures caused by the ongoing global shipping crisis, labour shortages, low availability and high prices of raw materials – including a severe shortage of steel for the production of nails - and generally disrupted transport flows around the world.

“The terrible events unfolding in Ukraine have had an immediate impact on industries of all kinds, disrupting vital trade flows, and reducing availability of many different materials and goods,' said FEFPEB secretary general Fons Ceelaert. 'The usual supplies of timber needed for the production and repair of wooden pallets and packaging have had been hit hard, and availability has been significantly reduced.

“Alongside the sizeable ongoing international challenges that already exist in the market, we expect to see a general upward trend in the price of all commodities, including wood,' Ceelaert explained. 'In the meantime, our member associations’ businesses around Europe are working hard to secure supplies from their partners in order to maintain continuity of pallet and packaging production.

“FEFPEB is in close contact with CEI-Bois and the European Commission, with whom we have shared our moral and economic concerns. We will continue to liaise with industry sources and monitor up-to-date information to enable us to keep our membership and the market informed about the very latest developments in this ongoing situation.”