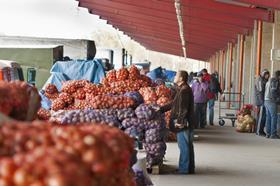 A buyer inspects potatoes at Stolichniy wholesale in Kyiv, prior to the Russian invastion (Photo: Sergiy Palamarchuk)

Ukraine’s fresh produce exporters have all but stopped as a result of Russia’s invasion, Fruitnet understands.

According to traders in Poland, the war has hampered Ukraine’s ability to sell its fresh fruit and vegetables to other countries, and will have a profound and lasting impact on the European fresh produce market.

“Ukraine is no longer an exporter of fruit.,” says Sebastian Szymanowski, general director of Galster Fruit Producers Group, an apple supplier based in Wierzchuchice near Bydgoszcz in the north of Poland.

“Today you can observe problems with logistics to the east. [They] are cut off in the direction of Kazakhstan and Mongolia to the east. The question is: how long will the war last and what will be its impact on fruit production in the coming season. It is difficult to answer this question today. I am for Ukraine with all my heart.”

Another Polish apple grower confirms that Ukraine's export trade had ground to a halt as a result of the war.

“Fruit produced in Ukraine seems to be impossible to find on foreign markets, but on the other hand, countries that supply fruit to Russia will also not be able to export there, due to the financial risk,” they comment.

“In addition, the purchasing power of Russians will drop significantly. A lot will change, but it is not known in what direction. I doubt the market will improve.”

'Friends on both sides'

Many people in the fresh produce business say they are greatly affected by events in Ukraine.

“It’s a painful subject,” says Artur Stasiak, chief executive of industry networking facilitator Fresh Market Poland. 'On both sides, I have a lot of friends and acquaintances. I'm very emotional and it's hard for me to make any predictions.”

Exports to Russia are all but certain to fall as economic sanctions start to affect the country’s buying power, he adds.

“The sanctions imposed on Russia will make it much more difficult to sell fruit and vegetables to that country, but it will still continue,” he predicts. “However, its scale, due to the fall in the rouble exchange rate and the impoverishment of [Russian] society, will significantly decrease.”

The Polish market itself will also face great upheaval, says Szymanowski. 'It is estimated that five million refugees from Ukraine may come to Poland, which will certainly stimulate fruit consumption.”