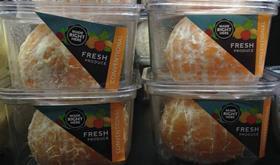 Whole Foods was forced to remove pre-peeled oranges from its shelves last week after they caused a storm of protest from social media users.

The controversy began when a photograph of the fruit, packed in individual plastic containers, was posted on Twitter by Nathalie Gordon along with the pithy comment: “if only nature would find a way to cover these oranges so we didn’t need to waste so much plastic on them”.

The comment was re-tweeted more than 80,000 times and generated tens of thousands of likes.

Hours later Whole Foods responded with the following message: “Definitely our mistake. These have been pulled. We hear you, and we will leave them in their natural packaging: the peel”.

This is not the first time that the retailer, which prides itself on its sustainability credentials, using paper bags and promoting the purchase of bulk food and other products using reduced or reusable packaging, has come under fire.

Last year a customer posted a picture on Instagram of asparagus water – bottled water with a few asparagus stalks floating inside, on sale in a Whole Foods store in Los Angeles.

The story prompted a wave of tweets about excessive or unnecessary packaging, with one account user posting a picture of SanLucar-branded pre-peeled bananas on sale in Austrian supermarket Billa.