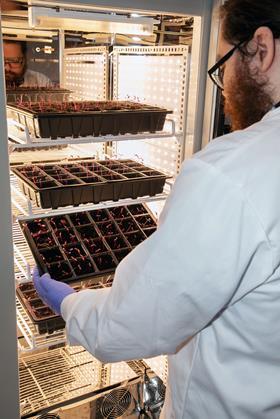 A new chemical-free seed-cleaning technology developed by Loughborough University spinout Zayndu has been shown to accelerate the growing cycle of baby leaf salads in vertical production.

The company is collaborating with Zayndu and NIAB on CHOPS (CEA Heirloom Optimisation and Pathogen Control ofSeed), an Innovate UK-funded project to create a quality-marked,high healthstatus seed system.

Vertical farms are closed systems, so arevulnerable to rapidly spreading fungal diseases. To prevent this, the highestlevels of hygiene are required, including cleaning seeds to remove fungalspores, the options for which are currently limited.

Zayndu’s activated air technology is completelydry and chemical-free. The company launched its small mobile unit Aurora Z10earlier in 2021 to allow small batches of seeds to be disinfectedby growersas required.

For the first time, it enables certain high-value seeds suchas tomato or fast-growing seeds like rocket to be disinfected, and it could allow more species to be grown in a controlled environment in future.

CEO of Zayndu, Ralph Weir, explained that the technology uses a ‘cold plasma’generated when an electrical current moves through air, splitting theoxygenand nitrogen molecules and creating a powerful disinfectant with no residues.

“Our initial focus was removing fungal sporesfrom seeds, and this has been successful,” he said. “We then observed thattreated seed was germinating faster and had a higher germinationsuccess rate.For crops such as microgreens, where there is a 10-day cycle, on or two daysfaster germination will have a massive impact on productivity.

“Cleaning seed with activated air has thepotential to increase productivity by 10 per cent or more and reduce the risk of fungaldisease, without the need for chemicals or hot water.”

Dr Jane Thomas, senior pathologist at NIAB,added thatZayndu’s cold plasma treatment was “a good technology and one of thefew optionsavailable for vertical farming”.

“The alternatives are hot water treatment, whichcan knock back germination of viable seed, or possibly UV lighting, which hasthe potential to damage the seed,” she said.

“The accelerated germination rates are veryinteresting. It could be that the treatment is ‘priming’ the seed by physicallyaltering its coating which is encouraging rapid germination.

“Salad leavesare ashort-lived crop, so reducing the cycle by a day will have a big benefit forproductivity, allowing more harvests within a fixed period and space.”

Weir added that Zayndu’s new technology “can be a godsend” for vertical farmers, particularly those growing crops such as pea shoots which carry high fungal loads.

“Infected pea shoots become slimy, smellhorrible, and lead to the crop being destroyed – and they may infect othercrops within a tightly-packed vertical farm,” he said. “Removing the fungi would make iteasier to grow high-value pea shoots in a controlled environment.”

Zayndu is offering a new batch-testing service, and breeders and growers who want to see the results for themselves can contactthem atseedhealth@zayndu.com.

The company is set to announce the findings of its trials at the online Global Vertical Farming Expo (GVFE) 2021 on 1-2December.