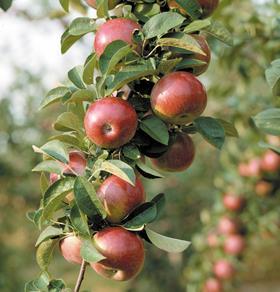 British Apples and Pears (BAPL) has today (4 October) announced the launch of its first sustainability report highlighting the 'green' credentials of its UK growers.

Authored by Professor Louise Manning of the Royal Agricultural University and using data from 75 per cent of UK orchards,the report reveals how the topfruit sector is addressing climate change in a bid to encourage UK consumers to buy British.

The report demonstrates how British Apples and Pears members are working to transition to more sustainable practices. Key findings from the survey of growers include:

83% of British apple and pear growers work with local beekeepers, with 70% producing honey from their orchards
93% of growers use biodiversity measures, such as varied grasses and wildflowers to encourage insects, leaving windfall fruit for wildlife to eat, and creating beetle banks and bee hotels
90% use weather and crop monitoring technology
63% have solar panels to generate renewable energy
Growers plan to plant more than 3 million new trees over the next five years

The report demonstrates the work of British growers in nine case studies, highlighting what sustainability means to them and where they see innovation and new ideas emerging in the industry.

As a key case study within the report, Robert Rendall from Boxford Farm in Suffolk says, “As a business we already produce more green energy and recover more water than we use, and it is our goal to be a carbon sink by 2027.”

Nick Overy from Mascalls Court Farm adds, 'It's really important that consumers are aware of how much farmers care about what they do, where their foods come from, and the strives we’ve taken to farm in an environmentally-conscious way.”

Author of the Sustainability Report, Professor Louise Manning says, “Smarter growing systems deliver economic, social and environmental value as part of a holistic sustainability strategy. British apple and pear growers are rising to the challenge of sustainable fruit production by connecting with nature, optimising resource efficiency, energy conservation and generation, while using smarter growing systems – and at the same time, ensuring the most delicious apples to our supermarket shelves.”

Ali Capper, Executive Chair of BAPL says, “Our dedicated growers are at the forefront of the climate change battle and are committed to addressing many of the issues faced, whilst maintaining the highest quality produce. This report demonstrates how the British top fruit industry is transitioning to become more sustainable and how British farmers are working hard to be forward-thinking and dynamic in their approach.”

British Apples and Pears is determined to get every adult and child in the UK eating an apple a day. BAPL is aiming to achieve 60-70% market share by 2030 by encouraging retailers and consumers to buy and support British home-grown produce.