Berries 'could prevent cancer in dogs' 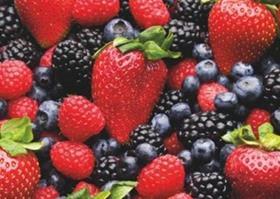 Industry campaign Love Fresh Berries has joined forces with The Dog Nutritionist to show Brits why dogs should be getting their paws on berries.

The benefits of berries for human health are well documented, but the ways in which berries can support our four-legged friends are much lesser known. The question “can dogs eat strawberries?” is searched around 22,000 times in the UK each month, making it the fourth most googled question about dogs.

Cancer is the leading cause of death in dogs older than ten, with almost half over this age developing the disease. More than one in four of dogs in the UK die from some form of cancer.

However, according to certified canine nutritionist and founder of The Dog Nutritionist, Cam Wimble, berries may be an excellent preventative measure.

Blueberries are one of the best possible sources of antioxidants, helping protect healthy cells from harm, which could aid the prevention of illnesses like cancer and heart disease in dogs, which are caused by damaged cells.

Resveratrol - a compound found in strawberries, blueberries, and raspberries - is a potent anti-inflammatory, which makes it valuable in tackling degenerative diseases in dogs – which nearly all involve long-term, low-grade inflammation.

Blackberries are a rare source of manganese which can help with dogs’ bone mineral density in order to aid movement and strength, making it particularly important as they grow older.

Wimble said: “It’s been brilliant to partner with Love Fresh Berries to show that the soft fruits are not just important for humans, but for our dog’s diets too.

“With one in four dogs dying from cancer, the antioxidants found in all four berries are especially important – with strawberries considered to have anti-angiogenic properties which may help prevent tumour growth.

“The four berries make perfect treats in their raw state – but I have also created some easy recipes to try if you want your pup to enjoy a really nutritious meal!”