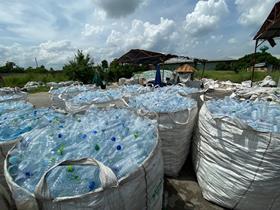 Berry Gardens is preparing to launch new recycled punnets using plastic bottles collected frombeaches and coastlines that would otherwise have ended up in the ocean.

The new rPET packaging, produced exclusively by Sharpak Aylesham, will feature in the majority of own-label punnets supplied to major UK supermarkets by Berry Gardens.

The launch follows a similar move from BerryWorld, which started using Prevented Ocean Plastic in its branded packs for the UK market in 2020. This season, the company has also begun using the recycled material in the own-label punnets it supplies to British supermarkets.

The move from both suppliers will have a positive impact globally since the plastic waste used in the packaging is collected from at-risk coastal areas such as South East Asia, South America and the Galapagos Islands, the Mediterranean, Central America and the Caribbean.

Nearly 90 per cent of plastic consumer packaging that ends up in the ocean enters from shorelines in developing countries. And Berry Gardens’ use of this packaging initiative is expected to prevent more than 204 tonnes of plastic from entering the ocean, the equivalent of 8.2 million water bottles.

As a grower-owned co-operative, Berry Gardens approves all packaging suppliers used by is producers, meaning all Berry Gardens grower-members will commit to using the new packaging moving forward.

Berry Gardens’ chief executive Nick Allen said:“We are committed to establishing responsible business initiatives throughout our supply chain and as an industry which has historically relied on virgin plastic, we are proud to announce that the majority of punnets used by our growers for major UK supermarkets will now include plastic which would have otherwise ended up in the ocean.

“We are striving to work with our growers to continue to produce and bring to market the very best quality and tasting fresh berries with as little impact on the environment as possible.”

The new punnets will contain up to 80 per cent recycled content, with each punnet made up of at least 30 per cent ‘Prevented Ocean Plastic’.

Supplied by Bantam Materials to Sharpak Aylesham, and certified by OceanCycle, Prevented Ocean Plastic refers to plastic bottles collected from the shoreline before being responsibly converted into high quality raw material.

Found within a 50km distance of an ocean coastline or major waterway, any plastic waste left uncollected would generally end up as ocean pollution.

Raffi Schieir, European director of Bantam Materials, said:“We need to increase take up of recycled plastic, collecting what is already in the natural environment so it can replace new plastic, save our oceans from devasting pollution and cut carbon emissions.

“As well as diverting plastic away from our oceans, Prevented Ocean Plastic helps coastal communities in developing countries by supporting bottle collectors, collection centres and local recyclers based there.

“We want to change the way everyone thinks about plastic waste, so it is recognised as valuable and everyone involved in the collection and recycling process is valued. This is an exciting next step on that journey.”