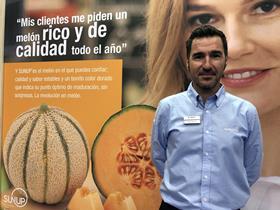 An expanding ‘club’ of producers has begun 12-month supply of BASF’s ripeness-indicating Sunup melon line, which it sees as a major step up from traditional cantaloupe varieties.

For the past five years, the Sunup range, which encompasses six varieties in total, has been grown commercially by three producers in Spain, namely Fruca Marketing, the Grega cooperative and Hermanos Daza Palermo.

Now two more unnamed growers – one in Brazil and another in Honduras – have joined that club to offer retailers year-round supply of the melon line for the first time.

The product's main markets are the UK, Germany, Scandinavia, the Netherlands and Switzerland, and production is also possible in Senegal and Morocco, BASF added.

The range, which the breeder describes as a ‘concept’ rather than a traditional cantaloupe, has skin that turns from pale to golden yellow when it reaches the desired Brix level and ripeness.

“We did a panel test with consumers in the Netherlands and Germany, who said it was important to know that a melon is ripe before you buy it,” said BASF's Enrique Ballester. “There are lots of people buying unripe melons and this is a problem because it gives consumers a bad feeling and is a barrier to repeat purchases.”

According to consumer research commissioned by BASF from Essensor, 68 per cent think it is important to be able to see that a melon is ripe, while 44 per cent regularly buy cantaloupe melons that are unripe.

Ballester said the new range has received positive feedback on its external appearance and internal quality from retailers and consumers alike.

Sunup’s other main advantages are its long shelf life, which helps to reduce food waste in the supply chain, and its suitability for slicing and processing.

A representative from Fruca Marketing added: “At the beginning we had small trials and our customers were not sure how the final client would feel about it, but the interest is growing every season and we are increasing our sales. We are starting to leave traditional cantaloupe on a second step, and we are placing a big bet on this line of products because we think it is the future of the melon category.

“In the past 10-15 years all the supermarkets have been looking for long-life melons, but in the last five years there has also been a return to focusing on taste. This product gives us both.”