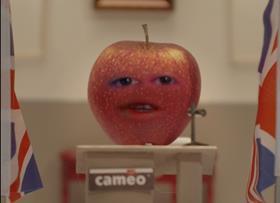 A still from one of the 2021 campaign videos

UK apple Cameo has launched a new advertising campaign on Facebook to boost consumer awareness of the club variety so that consumers look for it by name.

The campaign, which lasts until the end of April, coinciding with the variety’s key sales period, follows the success of Cameo’s social media campaigns from the past two seasons.

Last season, this resulted in 2.5 million views with an advertising cost of 1p per 15+ second view, demonstrating the cost effectiveness and reach of the activity, Cameo said.

Due to proposed EU changes in copyright legislation the brand has this season stopped using outside footage. Instead, promotional videos will link Cameo with topical events using original scenes created specifically for the Cameo Club.

There will be four concepts, the first of which is: ‘This is your year’. Six videos will be published on Facebook each month and supported by advertising on the platform.

Adrian Barlow, UK marketing consultant for the Cameo Club, said: “As the volumes of Cameo grown in the UK continue to develop, it will become ever more important to increase the public’s awareness of Cameo and its excellent eating characteristics.

“Facebook provides an opportunity to engage with a large number of UK apple consumers from diverse backgrounds and different ages extremely cost-effectively. We expect this campaign to further widen the demand for Cameo, benefiting both growers and all those in the supply chain.”