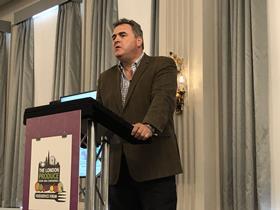 The British foodservice market is set to surpass the £100 billion mark in the next ten years, with exciting changes expected in the food we eat and the way we eat it.

Presenting his recent report, The Future of Foodservice 2025-2030, at the London Produce Show, strategic advisor Simon Stenning predicted that the sector would be worth £106bn by 2030, up from £90bn last year.

Stenning analysed the impact of a number of important factors such as demographic change, tourism, the growth of food delivery, the rising trend for veganism and flexitarianism, and the blurring of lines between retail and foodservice, concluding that there are big opportunities for foodservice operators as the sector continues to expand.

He noted that by 2030 millennials, who by then will be aged 35-50, will constitute the biggest age bracket, making up 18.9 per cent of the UK population.

The biggest population growth will occur among pensioners and working age people, presenting challenges for foodservice operators in the way they market their businesses, as well as an opportunity to recruit older staff.

In addition, as tourism in the UK continues to grow, tourist visits could exceed 65 million by 2030, creating huge opportunities to reach consumers from a wide range of backgrounds.

Emergent cuisines such as Malay are expected to establish themselves in the UK foodservice sector, while contemporary Indian chains such as Mowgli and Dishoom are tipped to expand.

More generally, Stenning stressed that consumers will continue to become more knowledgeable and demanding when it comes to the authenticity of global dishes – westernised versions of foreign cuisines such as Tex-Mex have had their day; now consumers want the real thing.

Encouragingly for the fruit and vegetable industry, meat reduction, veganism and health are trends that look set to continue, with plant-based foods such as Robin’s koginut squash, jicama root, beauregarde snow peas, ice plant, guayusa leaves, kernza grain and vegetable-based desserts tipped to be some of the next big products.

Meanwhile, food delivery will continue to grow and occupy a bigger share of the foodservice market, according to Stenning. Despite the fact that 57 per cent of the population uses delivery, ordering on average 2.2 times a month, these meals only account for around one per cent of total ‘stomach share’, with opportunities to grow this percentage.

Consumers are also being offered greater convenience through the blurring of lines between retail and foodservice, with foodservice outlets opening in various food retailers. For example, now you can find Yo! Sushi in Tesco and Wasabi in M&S.