Channel chaos ‘could have been avoided’

Disruption at Dover ‘could have been avoided’ says logistics firm, warning of further border chaos ahead 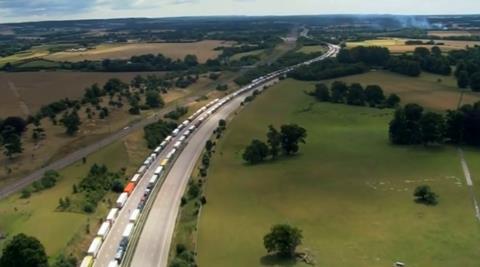 The weekend travel chaos at Dover is a scenario that logistics firms predicted almost a year ago and one that could have been avoided, says Mike Parr, managing director, Perishable Movements Ltd (PML).

Traffic queues and gridlocked roads in and around Dover prompted port bosses to declare a critical incident on Friday as holidaymakers reported waiting as long as 21 hours to reach the ports; and sparked a war of words across the Channel as British authorities accused their French counterparts of not sufficiently staffing the border, while Calais politicians blamed Brexit for the additional checks.

While Dover travel disruption improved yesterday (Sunday), the situation deteriorated in Folkestone, with the AA reporting that drivers were waiting for several hours in traffic before reaching the Eurotunnel. “Dover has now recovered, but Folkestone has become the hotspot of holiday hell,” Jack Cousens, the head of roads policy for the AA, told the Guardian.

“The reality is that neither UK nor French officials have been fully prepared for the impact of Brexit and the incredible additional paperwork / border checks and therefore increased resource associated with the UK’s exit from the EU,” Parr tells FPJ, who predicts further chaos ahead.

“We have every sympathy for holidaymakers who have spent the first day of their vacation stuck in a hot car but the effect on our industry has far more far-reaching consequences. As specialists in the movement of perishable goods we have invested heavily in the right infrastructure, technology and equipment to ensure a seamless transfer – with no break in the cold chain - of imported and exported temperature sensitive goods including essential foods, to maximise shelf life and ultimately guarantee their safe arrival on the supermarket shelves,” he continues.

“The delays have resulted in goods being held up for an unacceptable period of time. Our lorries are obviously fitted with state-of-the-art refrigeration units but every hour spent sat at the port erodes the shelf life and therefore ultimately the value of the freight.

“The situation has put huge pressure on so many of our staff – from the drivers who are aware of the urgency to reach their destination on time, the customs clerks who are dealing with all the extra paperwork, the account managers who are faced with anxious customers keen to track the progress of their consignment and of course, those dealing with the irate supermarkets who demand an uninterrupted supply of goods.

“The problems are not only affecting Dover, we’ve experienced an eight hour delay at Portsmouth and we’ve just been advised today that London Gateway is closed,” he adds, speaking on Monday (25 July).

“If only our industry had been properly consulted ahead of Brexit and those in power had listened. If only there had not been so many U-turns and changes to the new protocol so there was a stronger chance of a successful rollout. If only more attention was paid to the sector which is responsible for the delivery of essential food and drink products,” Parr says.

“Looking ahead, sadly, I can only predict further chaos. As I’ve said so many times before, the worst is yet to come, especially when the delayed additional planned EU import controls on SPS (Sanitary and Phytosanitary (SPS) measures relating to animal products, fish, shellfish, and related products) goods are finally introduced …”

Logistics UK, meanwhile, said that it was urging the UK government to work with French authorities to increase staffing levels at the French border to help facilitate the checks needed now that the UK is no longer an EU member.

“HGV drivers are advised to ensure they follow the correct routes to the coast as signposted, and ensure that they have the correct paperwork in the cab before they leave – this will minimise delays and is something we have been telling members about for some time,” said Rona Hunniset, deputy director of communications Logistics UK.