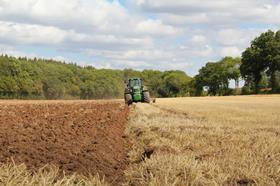 A panel of farmers, academics and NGOs have published a consensus pathway for making Scottish farming climate compatible.

In a debate that has been notoriously polarised, the Farming for 1.5 Inquiry has set out a way forward by bringing different perspectives and aspirations around the same table.

Agriculture accounts for 20 per cent of Scotland’s greenhouse gas emissions, and after a two-year long investigation, the Faming for 1.5 panel has produced a consensus set of policy recommendations, taking the sector from where it is today to net zero in 2045.

Farming for 1.5 was established as an independent inquiry in 2019 by NFU Scotland and Nourish Scotland. It was born out of the desire to explore a viable way forward for farming - one that could deliver for all stakeholders as well as nature and climate.

The key recommendations of the report include:

- whole farm contracts to deliver on farming and nature from 2024;

- rapid uptake in low methane breeding for cows and sheep.

Nigel Miller, co-chair of the inquiry said: “Being part of the 1.5 group has been a fascinating journey which through integrating food production, biodiversity, the wellbeing of both rural communities and landscape into a net-zero solution, has left me optimistic about the future of rural Scotland.

'The inquiry journey has reached into soil health and sustainable cropping, in some ways revisiting principles which were established in the 18th century with the first agricultural revolution. Cutting-edge science, precision techniques and genetics have also been a significant focus. Both approaches will be part of the net-zero future.

'The report, built on consensus, breaks through the tired soundbites that often dominate the climate change debate and block smart solutions. The transformation pathway mapped out by the group is a holistic plan which balances the three core goals; food, biodiversity and the 2045 net-zero target. It delivers for society as a whole but also provides an integrated route for farmers, crofters and land managers to deliver diverse and sometimes conflicting policy priorities.”

The full report can be viewed here.