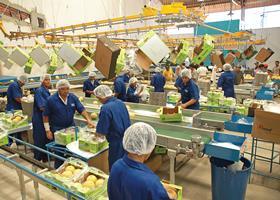 European demand for Brazilian fruit is expected to grow by five per cent in 2021 – that’s according toAbrafrutas, which represents about 85 per cent of the total volume of fresh fruits exported from Brazil.

The country’s fruit growers and exporters association forecasts a European market share increase of five per cent year on year for the next three years, with greatest growth in demand for Brazilian mangos, melons, avocados, limes and table grapes.

Brazil is one of the largest fruit producers in the world, growing 46 million tonnes in 2019, about 60 per cent of which is destined for EU shores.

With 70-75 per cent of Brazilian fruit exports arriving in the EU and UK each year, the trading relationship is critical for both sides, and Brazil remains a major source of limes, grapes,melons, bananas, mangos, and the Amazonian superfruit the açai berry.

Bouncing back from Covid-19

According to ApexBrasil, there wasan “initial shock” at the start of the pandemic, mainly due to the implementation of lockdowns in Europe and consumers pivoting towards foods with longer shelf lives. But theBrazilian trade and investment promotion agencysaidthe country’s fruit sector had “bounced back” with an impressive 78.5 per cent rise in exports to Europe in September 2020. Shipments were up a further6.7 per cent in October.

The organisation pointed out that historically, Brazil’s exports of tropical fruits occur during the last four months of the year, which explains the large increase in sales to Europe between August and September, and the more moderate increase between September and October, when sales have stabilised.

Looking ahead to 2021,ApexBrasil saidstrong growth in Europe and the UK “is expected to continue as people strive for balanced and healthy diets that include a diverse range of exotic fruits”.

When it comes to trade with the UK, the possibility of post-Brexit tariff and paperwork increases are a concern, but there were reports of discussions taking place in November between UK and Brazilian trade representatives.

The talks discussed strengthening bilateral trade and investment links, and the possibility of a post-Brexit bilateral trade deal, with separate reports in January that the Brazilian government could seek a Mercosul-UK trade deal similar to the trade agreement between the South American bloc and the EU. Sofar, no agreement has been reached.

UK trade negotiations aside, the challenge for the Brazilian fruit sector is one of timing and scale, as it races to respond to European consumer trends, such as an increased focus on healthier diets and demand for sustainable and organic produce.

The Brazilian fruit industry, the majority of which is made up of smallholders, is responsible for approximately 5.6 million jobs.

ApexBrasil said Brazilian producers and exporters are working to increase production “to meet demand in a way that is quick, efficient and keeps the sector competitive”, while putting an emphasis on sustainability.

One leading Brazilian fruit producer is AgrícolaFamosa, which was etablished in 1985 in the state ofCearáin north-east Brazil. Today it is the largest melon grower and exporter in the country, harvesting up to one million melons per day and employing up to 5,000 people during peak periods. Most of the melons (65 per cent) are exported to Europe, especially Germany and the UK.

In efforts to protect pollinator bees which are crucial for melon production, the company has pioneered organic pest control methods alongside the selective use of pesticides and insecticides. Today, there are around 6,000 hives and 300 million bees across the plantations which straddle thesemi-arid Caatinga region of the north-east.

In addition,AgrícolaFamosarecycles almost all waste into compost and organic fertiliser,eight tonnes of whichare used per hectare ofmelons. The company has also built windmills on the farm to provide electricity both for the company, as well as the surrounding area.

The producer’s sustainability efforts are certified by Rainforest Alliance andGlobalGAP.