The £250,000 pilot in two London boroughs is being funded by local authorities and a charitable foundation

An innovative pilot, thought to be the UK’s first large-scale “Fruit & Veg on Prescription” project, has been launched to help tackle health inequality and food poverty. 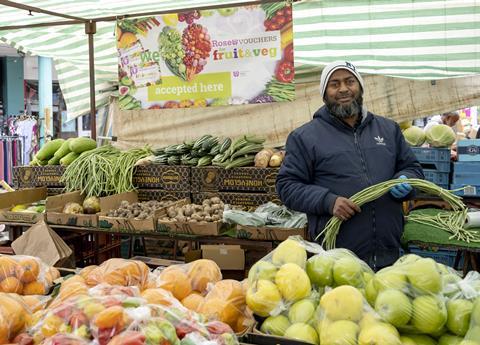 Alexandra Rose Charity, in partnership with public health teams in the London boroughs of Tower Hamlets and Lambeth, has launched Fruit & Veg on Prescription as part of a £250,000 pilot funded by local authorities and a charitable foundation.

The projects will be delivered in partnership with the Bromley by Bow Centre in Tower Hamlets, one of the earliest pioneers of social prescribing, and by The Beacon Project in Lambeth.

Trials in the boroughs, which both have high rates of chronic disease, will explore the viability of fruit and veg on prescription as a long-term solution to tackling diet-related ill health and food insecurity.

The project launches as food prices continue to soar and fresh food inflation has reached a record 13.3 per cent.

Each person will be prescribed Rose Vouchers for Fruit & Veg and will receive up to £8 per week in vouchers, plus £2 per week for each household member.

Participants can spend their Rose Vouchers on the fruit and veg of their choice with local retailers and market traders. In Tower Hamlets, they will also be invited to take part in monthly healthy lifestyle group sessions to improve their understanding of nutrition and health.

Alexandra Rose Charity operates in eight locations across the UK, supporting communities via its Rose Vouchers for Fruit & Veg Projects – these help families on low incomes to buy fresh fruit and veg.

The charity, which has been doing this work since 2014, says diet-related ill health costs the National Health Service billions each year. Prescribing fruit and veg using a social prescribing approach that considers a person’s whole life situation could prevent premature death and significantly reduce healthcare costs.

“Fruit & Veg on Prescription is an idea whose time has come,” said Jonathan Pauling, chief executive at Alexandra Rose Charity.

“The cost of living crisis is worsening and exacerbating rising levels of diet-related ill health and food insecurity. When calories from unhealthy food are three times cheaper than healthy alternatives, it makes sense that people will prioritise being full rather than being healthy, but this only stores up problems for the future.

“Diet-related ill health is costing the NHS billions every year, but more importantly, it is limiting the life chances of people on low incomes. We hope that the Fruit & Veg on Prescription Project will make a healthy diet easier to access for people who are struggling.”

Professor Sir Sam Everington, a GP in Bromley by Bow, Chair of NHS Tower Hamlets Clinical Commissioning Group, and Vice President of the British Medical Association, said all clinicians should embrace the prescription of fruit and veg.

“So many long and short-term illnesses deteriorate significantly with a poor diet. A healthy diet can often achieve far more than any medicines I can prescribe as a GP.

“Therefore, fruit and veg prescriptions are essential in reversing and preventing many illnesses. When I trained over 40 years ago, Type 2 Diabetes was a disease of the elderly. We are now seeing it in teenagers. Much of it is preventable with a healthy diet and good regular exercise. Fruit and veg should be part of every prescription.”

Dr Chi-Chi Ekhator, GP Lead at the Beacon Project and vice-chair of the Ascension Trust, said: “Fruit and Veg on prescription is absolutely key to tackling health inequalities in many vulnerable communities. As a GP, I continue to hear more and more from patients who have to make choices such as eating or heating as they grapple with the economic climate.

“Moreover, some are forced to forgo looking after their chronic diseases in the face of rising costs. It is not surprising that choosing to purchase fruits and vegetables becomes less of a priority. This scheme aims to help those who are most vulnerable achieve better control of their health through lifestyle choices that are evidenced based and will indeed make a huge difference not only to the individual but also to the NHS as a whole.”

During the 12-month pilot, Rose Vouchers for Fruit and Veg will be distributed to a target group of 122 residents across both boroughs who are at risk of, or have, conditions such as high blood pressure, diabetes or mental health conditions and are struggling financially.

Tower Hamlets currently has the highest poverty rate (39 per cent), child poverty rate (56 per cent) and income inequality of all London boroughs, while Lambeth also has a high rate of chronic disease and health inequality.

When the pilot is evaluated, it could be rolled out across the UK subject to funding.

Alexandra Rose Charity has also called for the government to implement the recommendations of the National Food Strategy quickly. The strategy, which has been on hold, recommended a “Community Eatwell” programme which recognised the huge potential role of empowered local communities working with primary care to radically change eating habits and health.