New campaign with City Harvest London and FareShare UK aims to divert 23,000 meals worth of fruit and vegetables to charity this Christmas 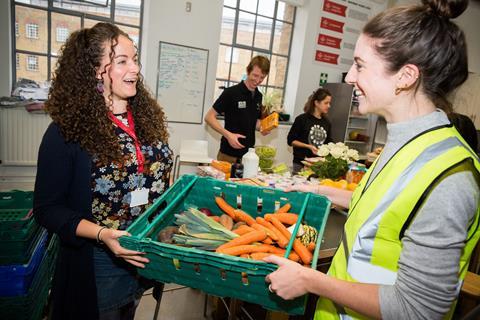 Suppliers can divert produce to FareShare through the FruPro app

Digital marketplace app FruPro has launched a Christmas campaign with food redistribution charities City Harvest London and FareShare UK to bring in 23,000 meals worth of fruit and vegetables to donate to people in need.

With Christmas fast approaching, the tech firm is calling on fresh produce suppliers to join their platform and divert any excess stock to people facing food insecurity.

Those who want to help and aren’t already on the FruPro platform are encouraged to sign up here. The platform is free to use for donations to FruPro’s food redistribution charity partners.

The appeal comes at a critical time for millions of people of the UK. Current statistics indicate a worsening situation: a staggering 14 million people in Britain lack reliable access to nutritious food; one in four households with children face the same situation; and 800,000 UK children cannot access regular and nutritious food.

FruPro is calling on its network of fruit and vegetable traders to redistribute any excess fresh produce to food banks and various charities through City Harvest and FareShare.

The tech firm’s CEO and founder Will Hill published a video message on FruPro’s YouTube channel, calling the fresh produce community to divert their excess stock to the people facing food insecurity.

COO and co-founder, Ollie Morley-Fletcher, added: “It is totally unacceptable to let people go hungry in any part of the world, but what saddens me is hearing about the shocking rise of food insecurity in the UK to 14 million people, especially when so much edible and healthy food is being thrown into waste bins at an industrial level.

“As we approach Christmas, FruPro wants to get as much food as possible to those in need. We thank our partners City Harvest and FareShare for making this possible and a huge thank you to businesses that have supported those in need with their donations.”

FareShare’s commercial officer Ben Read added: “The fresh produce that we receive from FruPro and its suppliers will go a long way to ensuring people experiencing food insecurity will be able to access nutritious and quality food this Christmas. With 18% of UK households now reporting food insecurity, any donations to FareShare are more important than ever.”