Glasshouse industry is lighting up 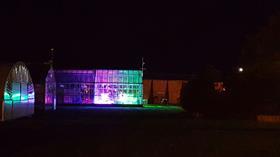 The trial glasshouse at the University of Nottingham at night

A new project that won almost half a million in Agri-Tech Funding last year is looking to revolutionise LED lighting in UK commercial glasshouses.

While some suppliers and lighting firms are already experimenting with different lighting combinations, this first-of-its-kind collaborative venture is taking it a step further – it aims to produce an LED lamp that can regulate light strength and output according to the specific requirements of the plant.

The major advantage of such a system is energy efficiencies – whereas most lamps, both LED and traditional sodium lights, are either on or off, the constant regulation of light output has considerable cost-saving potential.

Erik Murchie, associate professor of crop science at project lead University of Nottingham, explains: “Lots of manufacturers already offer recipes for light combinations – what we are doing is looking at how lights can regulate their own output according to the plant’s life cycle.

“Most glasshouses in the UK are lit by sodium lamps, which are either on or off, and they produce a lot of heat. LEDs will be a good replacement for these – they use less energy and should be cheaper. But one of the main advantages is the good control of colour – different combinations of light can control the form of plants, so when they flower for example. We can also regulate the structure of plants by adding different strength of colours.”

Murchie says UK horticulture is behind the curve in glasshouse technology – although some growers are switching to LEDs, there is nothing on the scale of Dutch glasshouse production or innovation. One of the reasons growers have been slow to invest is that LED lighting technology is still in the early stages, so there aren’t many proven trials. In addition, the traditional sodium lamps also have a heating effect useful for warming crops – a feature that super-efficient LEDs don’t have. “The main limitation is getting LEDs into glasshouses – there are lots in Holland, but much less in the UK,” continues Murchie. “This may be down to cost involved in replacing a whole sodium lighting system, so there is a drag factor on LED investment in the UK glasshouse industry.”

But with this project, British growers have the chance to lead the way as Murchie believes no one else is looking at self-regulating LED lighting. “We are building all our own technology so lots of it is very exclusive. We have lamps in a trial glasshouse at the University of Nottingham, and we will soon be moving to a large-scale commercial trial site at a herb grower in the south. This project has 15 months left out of a three-year project, but we hope to apply for more funding.”

The project is only testing LEDs on herbs at the moment but Murchie says the technology would work on any glasshouse crop. “We decided not to test in-canopy lighting, on crops such as tomatoes, but in reality this technology will benefit any leafy crop with low biomass and high value,” he says. “Long term there are huge cost savings. As well as the energy efficiencies, there is evidence that you can change quality and flavour of crops. LEDs will also be particularly important in the UK to get extra light during the winter. Most people I’ve spoken to think LED lights are the future – at the moment they’re just not particularly well understood. Growers need confidence. But we can see the results and they are working better than the old lamps, in terms of energy efficiencies and yields.”

The University of Nottingham-led project to create a low-cost energy saving and climate control system for glasshouses won £436,076 of Agri-Tech Funding last year. In partnership with the Cambridge Glasshouse Company, Geo Green Power and Kevothermal, the project aims to provide a sustainable solution to the “inherent problems and insufficiencies” of the greenhouse industry.

A futuristic glimpse of glasshouse technology, the robots allow for significant labour savings as the site can now operate with only four staff. In addition, the robots result in a better-quality product, Langmeads said, as the plants are not disturbed or bruised through human handling. Remote light temperature and humidity level controls further reduce the need for human operation, while an automated germination room reduces this process down from eight to three days.