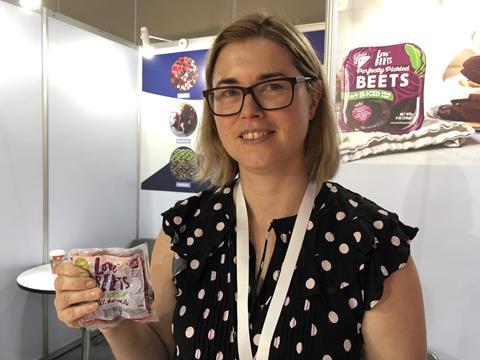 G’s Fresh is looking to expand in the Asian market with its vacuum-packed cooked beetroot sold under the Love Beets brand.

The UK-based supplier previously exported beetroot to Asia through a partnership with Australian producer One Harvest that lasted roughly 10 years. However, for the past two years it has switched to sending UK-grown beetroot instead.

Costco in Japan and distributors in Singapore and Malaysia are the main customers, but speaking at Asia Fruit Logistica in Bangkok, G’s commercial manager for Asia, Sarah Huntley, revealed that the supplier is also in the process of negotiating market access to Thailand for its cooked beetroot.

While the product remains niche in all of the above markets, Huntley says there is growing demand, with potential for sales growth if consumers can be successfully educated in recipe creation and the vegetable’s distinct taste.

The Thai market looks especially promising due to the popularity of beetroot in Thai slaws and salads, she added.

Exports to Japan and Singapore are limited to just a few pallets, with products sent by air to Singapore and by sea to Japan, where they can command prices of almost US$ for a 250g pack.

Huntley described the process of growing demand for cooked beetroot in Asia as a “long burn” but revealed that G’s is also considering the possibility of exporting other fresh vegetables to Asia as well as cooked and vacuum-packed sweetcorn.