Hortgro highlights versatility of nectarines and peaches in UK campaign 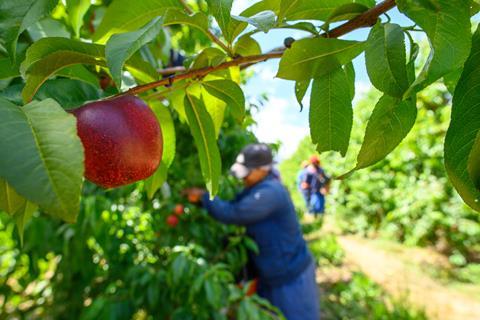 Hortgro has forecast a 13% increase in nectarine exports

South African producers are highlighting the versatility of nectarines and peaches as they look to excite UK consumers about new-season stonefruit.

The marketing push comes with a warning, however, that returns must match investment on farm if the sector is to grow.

A 13% increase in nectarine exports is forecast for this season as more young orchards come into production and new, higher-yielding cultivars bring more crop to market. The early season is estimated to be up 8%, mid-season 24%, and late season 10% compared to 2021/22.

Producers are hopeful the new orchards and varieties will turbocharge the industry, with double-digit volume growth anticipated over the next five years.

For peaches, export volumes are expected to be similar to last season, although early-season output is likely to be 7% lower.

Last year was a challenging one for South Africa’s stonefruit exporters, who had to deal with logistical bottlenecks caused by a port strike, however trade body Hortgro says these issues have now been resolved and the market can look forward to an efficient service.

“Over the off-season a lot of time and effort has gone into rectifying the delays experienced in port during the previous season,” explained Jacques du Preez, general manager of trade and market at Hortgro.

“We believe that a much-improved service in the Cape Town port specifically will result in much shorter transit times and a positive impact on quality.”

Hortgro is running a series of promotions to encourage consumers to buy into the category. Fruit sampling will take place at Tesco’s head office in February, with branded peach and nectarine banners on Ocado.com in the first two months of the year.

Key messages will focus on the versatility of peaches and nectarines, which Hortgro says are a great alternative to meat and add sweetness to savoury dishes such as stir fries, curries and stews. They can also be added to hot porridge or mixed with yoghurt and nuts for breakfast.

Despite the positivity about the future market potential, Hortgro has warned that the sector must be supported by adequate returns from customers.

South African producers have been investing heavily in environmental sustainability initiatives, but Du Preez was keen to stress that sustainability must also extend to growers’ returns for their produce.

“All the cost and responsibility cannot simply be pushed onto growers,” he said. “At this stage ‘sustainability’ to stonefruit growers refers to being able to farm again next season. Costs are running away, and prices paid to growers are simply not keeping up.”

Hortgro fears that the huge financial pressure growers are under will lead to a slowdown in the expansion of orchards over the next couple of years while producers try to stay afloat.

Du Preez described the industry as “in a consolidation phase”, with growers already having taken their efficiencies to the maximum level.