Over 6,000 tonnes of home-grown cherries are expected to hit supermarket shelves this year

The UK is primed for a strong cherry season, according to trade body Love Fresh Cherries, with over 6,000 tonnes of home-grown fruit expected to hit supermarket shelves this year. 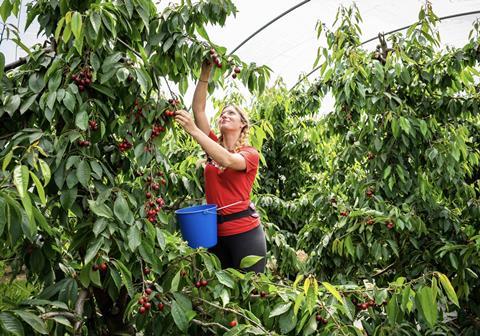 With UK growers continuing to cultivate cherries across the country including in Kent, Hereford, Staffordshire, Hampshire, Lincolnshire, Essex and Scotland, Love Fresh Cherries said that consumers would have already seen British cherries appearing in stores in small quantities since mid-June.

This week marks the start of larger volumes hitting shelves, meaning that shoppers will be able to purchase British cherries in stores all the way through to late September.

“This year’s British cherry crop is set to be another extremely healthy and tasty British crop, helped by the glorious weather we’ve been experiencing over the last few months,” said Love Fresh Cherries spokesperson Matt Hancock.

”With exceptional growing conditions and crops harvesting earlier than last year’s late one, we’re looking forward to getting an abundance of British cherries into consumers hands this summer,” he added.

Despite the challenges experienced across the UK fruit picking industry due to a lack of post-Brexit and post-covid seasonal labour, the cherry industry, via Love Fresh Cherries, confirmed that its growers were continuing to pick and manage their crops the best that they could and remained in a positive frame of mind.