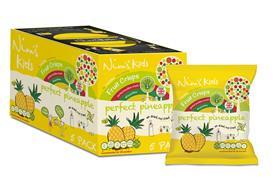 Waitrose has become the first major supermarket chain in the UK to stock ‘Nim’s Kids’ multi-packs after signing a new deal with the Kent-based fruit and vegetable crisp manufacturer.

Nearly 70 per cent of its stores across the country will be selling multi-packs of the growing brand’s crisps in two flavours, apple and pineapple, providing consumers with an alternative to mainstream snacks for their children.

It marks a milestone for Nim’s founder Nimisha Raja, who initially started the business with the desire to give children healthy crisps they want to eat and parents were happy for them to have.

She has already seen her ‘adult’ versions of the fruit and vegetable crisps stocked in over 3,500 outlets including Tesco, Co-op and independent retailers.

“This is a defining moment for the company and means we have finally achieved the vision the business was initially built on,” said Raja.

“We have been working with a lot of retailers on getting Nim’s Kids stocked in mainstream stores and we are delighted that Waitrose has given us our first listing. The two multi-pack variants (apple and pineapple) will be available in 239 stores, which is a major commitment by the retailer.”