UK logistics specialist PML is considering taking the government to court over its decision to defer the introduction of controls on imports of European plant and animal produce. 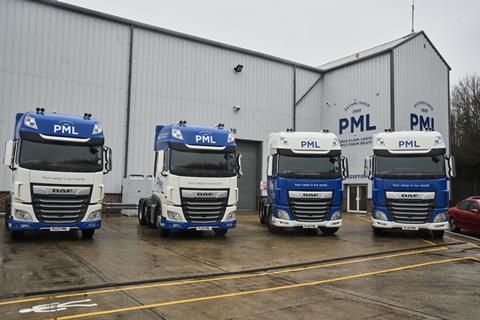 In a statement issued on Tuesday, the company said the threat by British ports to take legal action against the government after investing millions of pounds to create post-Brexit border control facilities which now remain unused in the wake of the delay in introducing the checks “is one that resonates very clearly with us”.

PML said it had always strived to stay well ahead of any planned changes in legislation which are likely to impact on its customers.

“When Brexit was announced we, like so many other logistics businesses, worked very hard to interpret and understand the proposed changes. It was always disappointing to note that the voices of those working at the coalface were never really heard before or during the drawing up of plans,” the company said.

“At a time when we were also battling the challenges associated with Covid, we committed huge resources to ensure we were fit and ready to adapt our business to meet the new Brexit requirements.

“Huge resources in terms of upweighting our staffing to work through the minefield of confusing new paperwork; committing dedicated personnel to monitoring the constant changes in government guidance and shifting of deadlines; future proofing our new state-of-the-art Kent logistics and transport hub so that it is compliant and had the capability to meet with the new border control checks protocol.”

PML added that it had worked tirelessly throughout the pandemic making sure that the supply of essential food and drink was not compromised, even at a time when the complexities associated with Brexit were starting to take their toll making operations even more challenging than they needed to be.

“We flexed our creative muscles to come up with innovative ways in which to overcome the hurdles persistently presented to us. When we encountered problems with the rising price of air freight cargo, we started our own chartered service from Kenya, twice a week.

“When the LEZ zone was extended to include Heathrow, incurring prohibitive costs for haulage companies, we identified an alternative route via our Kent-based hub which provided excellent proximity to the ports and motorway network.

“When the HGV driver crisis struck, once again compromising the supply of food and drink we campaigned for improved facilities for drivers comparable to that experienced on the continent. And not only did we raise awareness of the issue, we also invested in the provision of an HGV welfare unit where drivers can park up in a secure setting, rest safely, access clean and well serviced washroom facilities, grab a wholesome meal, refuel and even wash their lorry. Treating the drivers like the heroes they really are.”

PML said the latest government U-turn had forced the business to incur significant costs “could signal the demise of many freight forwarders who are now seriously out of pocket”.

“With the political landscape looking more precarious than ever before, we are not confident that this will signal the end of any further last-minute changes,” the company continued.

“Surely the government has to acknowledge its role in playing with people’s livelihoods and accepting that the mistakes it has made have had dire financial consequences for many. Supporting and guiding business, kickstarting the economy, providing a framework for growth. Surely this is what we should be expecting from those in power?

Instead, PML said logistics companies are “on the receiving end of chaotic thinking and ill-thought-out strategies which not only cause disruption and discontent but also inflict financial hardship.”

It said the sector has been treated appallingly. “PML is considering similar legal action. But in the meantime, who and when will this be sorted out. And what will convince us to even believe in any further empty promises?” the statement concluded.