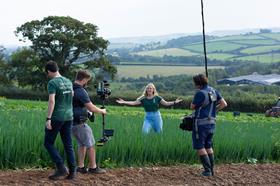 Organic veg box business Riverford has released a short film highlighting the impact of food choices, calling on people to “change the world one carrot at a time”.

Featuring a poem penned by Riverford co-owner Ellen Warrell, and featuring Riverford staff who have been co-owners of the business since 2018, the new clip was directed by Christian Kay, titled “A Walk Through Our Fields”.

The video will form the centre of Riverford’s upcoming multi-channel brand campaign, and expresses some of the sentiments that have made Riverford’s ethos popular and controversial among different corners of the industry.

“Sod the supermarkets,” says one co-owner in the clip, “and form a cooperative”; “swear allegiance to the seasons”, says another, and “let the planes pass overhead laden with strawberries and asparagus in the winter,” in a dig against air freight imports.

Lines from the poem will be featured on the London Underground, and Sky’s on-demand AdSmart, and even a limited edition tea towel sold on the Riverford site.

“When I was asked to create a short film about Riverford, I sat for weeks staring out at the fields of salad growing on the hills all around us – and I realised that I had no need to fabricate anything,” said director and Riverford co-owner, Christian Kay.

“Everyone very gamely stepped outside of their usual roles to help bring our ideas to life. It was an amazing team effort, and says, I think, as much about the warmth at the heart of Riverford as the film itself,” he added.

Riverford founder, Guy Singh-Watson said: “This film came from co-owners, it was written and recited by them, on their land, about their crops, and for their customers. Riverford is more than a brand. We grow, pick, pack, deliver, cook, write our own software and do our own sales and marketing, and we care about how we do it down to the fine detail.”

The values in the poem range from protection of the environment, fair returns to farmers, no chemical pesticides and a co-operative ethos, reflecting Riverford’s outspoken environmentalism since it was established in 1987.

Singh-Watson has long spoken out about the unfair treatment that many farmers face in the hands of supermarkets – a well-recognised issue of supplier relations that is now being treated as a serious problem thanks to its inclusion in the newly-released Agriculture Bill.