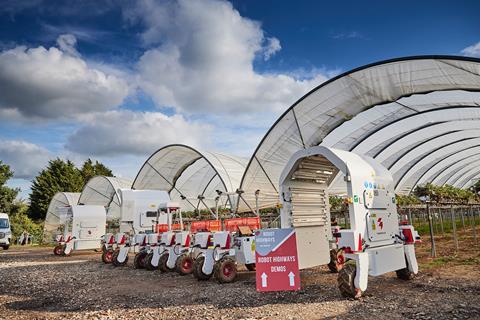 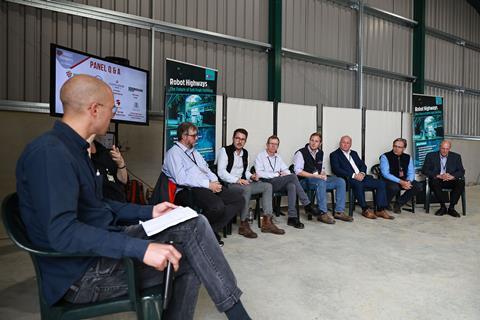 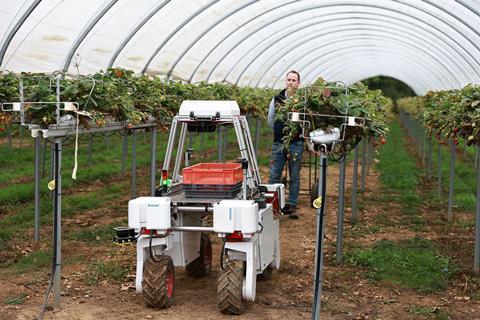 Back in the summer of 2020 the Robot Highways project made waves in the fresh produce industry with the announcement that it was setting out to create the largest known demonstration of robotic and autonomous technologies in the world.

The trial, at Clock House Farm in Kent, aimed to deliver a vision for the future of soft-fruit growing – a future in which robots assist growers by carrying out essential energy and labour-intensive processes such as picking and packing fruit, and treating crops to reduce pests and diseases, all powered by renewable energy. The ambitious forward-thinking project has been funded by Innovate UK and others to the tune of £2.5m.

The consortium behind the initiative brings together seven partners: project lead Saga Robotics, Berry Gardens, leading strawberry grower Clock House Farm, the University of Lincoln, the University of Reading, research and technology organisation the Manufacturing Technology Centre, and BT – to build a 5G network and software platform that makes it possible for robots to operate and gather data across the farm.

The robot in question is known as Thorvald, and many in the industry will now be familiar with Saga’s multi-purpose platform, which Clock House Farm showed off to delegates at this year’s Festival of Fresh. Over the past two years Clock House has been using the robot to carry out various tasks involved in strawberry production. As well as UVC treatment for powdery mildew, Robot Highways has demonstrated runner cutting, the distribution of predatory mites, data collection, crop forecasting, grass cutting – and the holy grail of strawberry harvesting.

Now, two years on, the project is delivering some impressive results, and in late September, Clock House welcomed the industry to its farm in Kent to update people on its progress. This came in the form of a panel discussion involving the consortium’s partners as well as demonstrations of Thorvald’s various applications.

“We have had very good commercial traction with our UVC service, which has been developed over the last few years,” says Saga Robotics’ head of deployment, Halvard Grimstad. “While this is not a direct output from Robot Highways, it serves as an excellent starting point for an ambitious project.”

Thorvald’s UVC treatment is carried out at night, when the robots have the run of the farm. They travel up and down the rows of tabletop strawberries, preventing powdery mildew using UVC light. Exposing the plants to shortwave light on a weekly basis like this is an effective way of controlling the pathogen responsible for powdery mildew.

And carrying out this task robotically reduces the labour requirement compared to conventional fungicide application, as well as replacing the need for chemical spraying.

In addition, next year will see the commercial launch of Saga’s Integrated Pest Management portfolio, with more details on the precise offer to follow.

Grimstad, says there is strong demand from soft-fruit growers for robotic UVC treatment, as well as some of the other repetitive manual tasks being trialled. However, he concedes that robotic harvesting is a tougher nut to crack, and it looks likely to take longer to achieve than other any of the other applications. Picking trials are ongoing at Clock House.

When it comes to rolling these technologies out to the wider industry, MD of Clock House Farm, Oli Pascall, says their adoption should be “relatively straightforward” but stresses there are still steps that must be taken to reach full commercial viability for tools beyond UVC.

One thing he emphasised in the panel was that he doesn’t think the adoption of robotics will reduce the cost of production for growers or make a significant dent in their labour requirements. What it will do is make them more reliable (since they will be less exposed to the volatility of labour supply in the UK) and more sustainable (since it will reduce growers’ chemical inputs and help them switch from diesel-operated to renewable energy systems).

“We don’t forecast any drop off in labour requirement from our immediate adoption of robotics,” he told the audience at the recent panel discussion. “We’re generally replacing ones and twos rather than 10s and 20s of people. And we’re a growing business, so we don’t see a reduction in the requirement of people.

“As the soft-fruit industry moves through the next decade, and becomes slowly more reliant on robotics, we need to be very conscious that it’s not an immediate swap for the labour requirements. in our businesses.”

Fellow panellist Mike Wilson, who is chief automation officer at the MTC – which helps businesses adopt robotics and automated systems – added that robotics is not about replacing people but replacing tasks. “You can then use your staff “to add more value to the product so they’re not there just moving things around”.

He conceded that there are some “skills issues” that the industry needs to address when it comes to adopting and operating robots on the farm or in the packhouse, but he said these are generally “relatively easy to overcome once you understand what they are”.

The fresh produce industry is becoming more and more willing to embrace robotics, he said, seeing it as a way of addressing the issues around labour availability by automating the mundane, repetitive, and arduous tasks in their operations. “The barriers,” he said, “are largely down to fear of the unknown, but we can help people trying to start on that journey by helping them avoid mistakes.”

Within the Berry Gardens cooperative, R&D director Richard Harnden said interest in the Thorvald robot has been wide-ranging, with some growers keen to be early adopters of the technology and others preferring to let others have a go first. Nevertheless, he expects to see “pretty decent uptake” of robotic UVC treatment within the Berry Gardens co-op in 2023.

Looking slightly further ahead, Grimstad expects to see “wide-scale adoption” of the Thorvald robot at soft-fruit farms in Britain and abroad over the next five years. And he said the next couple of years will be “very important stepping stones” in terms of scaling up to operating whole fleets of robots at a commercial level. An important consideration for growers in this regard is safety – which Simon Pearson from the University of Lincoln described as “the next layer” of the Robot Highways project.

“There is going to be a move towards regulation in this space,” he said. “So, what we’ve got to do is make sure everything is safe, not only for workers but also for the environment. What we don’t want to do is develop an industry which crashes because something dreadful happens at some point in the future. We have to build it very, very securely.”