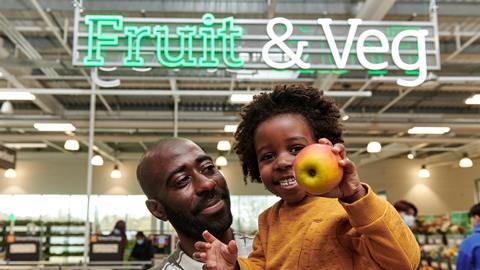 Sainsbury’s fresh produce sales are set for a boost this summer after the supermarket announced the return of its ‘Great fruit & veg challenge’.

The initiative is in its third year and has so far seen almost one million customers taking part, with some 106 million portions of fruit and veg purchased.

Running from Monday 18 July to Friday 2 September, the challenge uses fun, interactive targets to encourage customers to pick up more fruit and vegetables when shopping at Sainsbury’s. In return, they will be rewarded with bonus Nectar points that can be spent at partners including Sainsbury’s, Argos and Habitat.

Sainsbury’s said the ‘Great fruit & veg challenge’ is one of the ways it is ‘Helping Everyone Eat Better’ by making healthier and sustainable diets more accessible. The retailer has also continued reformulating its own products to cut calories, sugar and salt, whilst at the same time introducing more plant-based options.

To participate in the challenge, customers sign into the Nectar app and are set personalised targets based on their typical shopping habits, enabling each user to earn up to 750 bonus points.

Nectar app users can earn points either by completing three overall goals based on the number of portions of fruit and veg purchased, with up to 350 points up for grabs; or by collecting eight product badges, worth 50 bonus points each, by purchasing portions of specific fruit and vegetables, such as strawberries, tomatoes, and broccoli.

This year, the challenge has been extended from four to seven weeks for the first time, giving customers longer to collect their badges and earn points throughout the summer holidays.

Last year Sainsbury’s also offered its customers a £2 top-up voucher each time they used government Healthy Start vouchers in their basket. Customers who redeemed these vouchers in Sainsbury’s automatically received a coupon worth £2 to use towards fresh and frozen fruit and vegetables during their next shop.

In the six months the programme ran, the retailer said it supported over 17,000 customers to take home an additional 1.2 million portions of fruit and vegetables, adding an average of 5.5 extra portions to their baskets.

Mark Given, chief marketing officer at Sainsbury’s, said: “It’s easy to get stuck in a rut eating the same fruit and veg, and we’re always looking for ways we can encourage people not only to add more of the fruit and veg they love to their baskets, but also try new things. It’s why we’re bringing back the Great fruit & veg challenge to our stores, to make healthy food even more accessible to families.

“Last year over 500,000 people took part and collected over 83 million Nectar points. We also know that our customers continued to keep up their fruit and veg intake for at least six weeks after the challenge ended. With an extra three weeks to this year’s challenge, we’re hoping to beat this target while continuing our commitment of helping everyone eat better.”