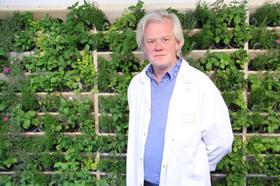 Fed up with supplying strawberry varieties developed for supermarkets to chefs whose primary focus is taste, managing director of catering supplier Solstice Philip Britten took matters into his own hands.

The company now has an exclusive agreement with East Malling Services (EMS) to trial and supply strawberry varieties that are designed specifically to suit the needs of the catering sector. With ongoing trials and a chef tasting day in the pipeline, Britten explains why two of East Malling’s existing varieties – Malling Centenary and Vibrant – have been picked for their taste, sweetness and appearance. Meanwhile, the upcoming tasting day will allow Solstice’s restaurant customers to sample new varieties, with a view to potentially supplying an entirely new strawberry to the sector. “Supermarket varieties are focused on long shelf-lives, but chefs don’t care about that. They care about the taste and they care about texture,” says Britten.

“My objective is to supply products that people really want to eat. We are trialling varieties that they know work, and then we will get feedback from chefs and go from there.”

Britten, a previous Michelin-starred chef, is already something of an anomaly in the catering supply and wholesale sector. After 22 years, he left the world of high-end cuisine after winning a raft of industry accolades to focus solely on Solstice, which he founded to source the quality produce he was looking for.

Along with sales manager Chloe Cleverley, he initially met East Malling scientists at a country fair, after tasting raspberries produced by a Scottish breeder. Determined to find a partner closer to home, Britten visited the EMS stand and began discussions about how to create an exclusive breeding programme. After searching for years for produce that would prioritise taste, he says it was “mindblowing” to find breeders who would work with him to produce and supply a strawberry solely for its eating quality.

Solstice now has a commercial contract to buy all its British strawberries from EMS, and going forward the company may look to fund research in other products with the same goal of re-discovering tastier heritage varieties.

Britten is passionate about finding older varieties that tasted better, but may have been phased out in place of more hardy, higher-yielding varieties to meet volume needs of major retailers. He says: “In my mind it’s trying to get back to what made the flavour of produce so attractive in the first place. Berries need a cold climate, they often grow up high, that’s why berries from Scandinavia are so good – what we see in supermarkets is a version of them that has been manipulated.”

Following the trend across both retailers and, increasingly, wholesalers, to buy direct from growers, Britten says the East Malling agreement is part of the company’s wider policy on direct sourcing. “They’re so passionate about what they do – that’s one of the reasons why we wanted to go to East Malling,” he explains.

Going direct to breeders is not the only way Solstice stands out from its former neighbours at New Covent Garden Market – the firm has recently relocated to a new 40,000 sq ft site in Wimbledon, south London, in a refitted warehouse complete with packhouse expansion space, staff facilities, and cold stores. Bespoke additions such as the handmade wooden desk in the office, staff showers and social space, and a fragrant living herb wall in the main office, complete the picture.

“The larger site isn’t necessarily so we can grow, it’s so we can appreciate the produce we’ve got,” says Britten. The company delivers to its London-based network of customers seven days a week, after investing time and money in creating a week-long staff rota. Britten explains: “That’s the expectation these days – the culture we live in is 24/7, seven days a week, so we cater for that.”

His 22-year career as a chef included five years at The Dorchester, under Eugene Kauffler and Anton Mosimann.

He spent five years at Michelin-starred Chez Nico as part-owner, and became head chef at the age of 27.

He also worked for 11 years as head chef at Michelin-starred restaurant The Capital.

Britten began to focus solely on Solstice in 1999, taking with him a network of high-profile chef contacts.

In April 2015 Solstice moved from New Covent Garden Market to larger units on an industrial estate in Wimbledon.

What the breeders say

“This is a new venture for East Malling – local supply of the highest quality UK-bred, locally-sourced and specially grown produce,” says Roger Carline, managing director of East Malling Services. “Given the proximity to market we believe we can deliver something special.”

EMS is looking forward to expanding this relationship with the restaurant sector, through its partnership with Solstice. “The next step is to see which of the selections from EMR’s soft-fruit breeding programmes might have that special wow-factor that is right for caterers. We will be working to identify the right produce that the foodservice sector really wants,” adds Carline.