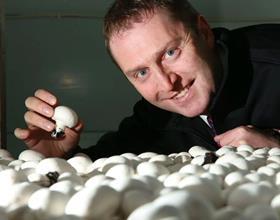 Mushroom sales have been, well, mushrooming. Buoyed by the coronavirus-related revival of scratch cooking, the category has been attracting new, younger customers in recent weeks, with sales of £450 million forecast for 2020.

Growth in the category is currently running at twice the rate of total vegetables, with over £113m of sales racked up in the first three months of 2020 alone. And backed by an industry campaign highlighting the environmental benefits of choosing British and Irish fungi, the category appears to have every chance of expanding further.

It’s fair to say that while there is something otherworldly about the way mushrooms emerge from the compost (or ‘pin’) in the warm, damp chambers of a mushroom farm, their current sales potential is firmly grounded in reality.

Padraic O’Leary of Walsh Mushrooms, one of the UK’s leading producers, says it is an exciting time for the sector despite the challenges of Brexit and coronavirus. “These are challenging times because of what we’ve been through with Covid-19 and what’s coming down the tracks with the unknown Brexit, but at the same time it’s great to be part of an industry that’s growing and expanding.”

The catalyst for the recent rapid expansion of the category has been one of those challenges, Covid-19, with many consumers returning to scratch cooking during lockdown and using the versatile product in a wide range of home cooking. While it has accelerated since late March, this growth is not new, however. Mushroom sales increased steadily from around £390m in 2015 to approximately £430m in 2019, according to Kantar.

Besides their suitability for scratch cooking, health may also have been a driver for the recent sales surge, with several well-publicised (but contested) studies suggesting that vitamin D could be used for the treatment or prevention of Covid-19. Mushrooms are the only product in the vegetable aisle that contains the vitamin, with all having at least some, however since 2016 Tesco and other retailers have started stocking vitamin D-enriched mushrooms that have been exposed to UV light during production. “This is important, and I think we probably need to do more to get that message out there,” says O’Leary.

With the foodservice sector reopening and people slowly starting to get back to their old routines, the question is whether the mushroom category can maintain its heightened retail sales. O’Leary is realistic but positive about the outlook. “I’m sure we will get back to snacking on the go and eating out more, and I do think we’ll see a certain amount of sales moving back to the foodservice sector, but if people get a taste for cooking and consider it to be healthier to eat at home, then maybe we can hold onto a percentage of those new retail shoppers and sales.”

The campaign makes the point that whereas UK or Irish mushrooms travel a maximum of 400 miles to reach the consumer, those from other mushroom-producing countries like Poland and the Netherlands can travel in excess of 1,100 miles.

O’Leary is clear in his assertion that the UK and Ireland could quite easily supply 100 per cent of Britain’s mushrooms at retail but is currently only doing 80 per cent. The potential for expansion is very much there, he says, but warns that production could actually fall if Britain struggles to source enough labour after Brexit.

The impact of Brexit on the Irish mushroom sector has been well reported, of course, with dozens of Irish growers going out of business due to worsening exchange rates between the euro and the pound. “The biggest impact has been on the labour pool because it’s less attractive to come and work in the UK because of the weaker sterling,” says O’Leary. “We’re all taking workers from a big pool of labour in Europe and unfortunately Brexit has made it less attractive and less lucrative to come and work in the UK than in some other countries.”

He adds that as votes continue in Parliament, the continuation of free movement is going to be “very important” to the mushroom sector since it is such a labour-intensive industry. At the majority of farms all the mushrooms are picked by hand.

This is about to change at Walsh Mushrooms, however, with the supplier set to trial a new system that will semi-automate the harvesting process. As part of a £1.5m expansion of the company’s Irish site in Golden, County Tipperary – which is set to be completed in September – the supplier wants to “semi-automate what happens around the harvester”. O’Leary points out that as well as reducing the company’s labour requirements, it will allow staff to be more productive and therefore be paid more, hopefully helping Walsh Mushrooms to recruit and hold onto more staff.

“Currently you’ve got a harvester who has to pick the mushroom, remove the stem, place it into a punnet, weigh it and put it into a crate,” O’Leary explains. “We’re trying to make it so the harvester just picks the mushroom and then everything else happens automatically after that. It’s early days in the project, and I think we’ve got quite a bit of work to do to crack it, but it’s the biggest challenge for the industry.”

Another challenge this year is straw, a key ingredient in mushroom substrate. Since the most popular mushroom types, white, chestnut, are grown indoors you’d be forgiven for thinking that the product was immune to the vagaries of the weather, but this isn’t the case. “We had the particularly wet winter followed by a really dry spring, so there’s going to be a shortage of straw in the year ahead,” says O’Leary. “Obviously that will push up prices because there are other sectors competing with the mushroom industry for straw and wheat [whose grains are also used in mushroom production]”.

As in most fresh produce categories, rising production costs are a major challenge in mushrooms, with O’Leary highlighting the fact that the national living wage rose by 6.2 per cent to £8.72 on 1 April. “The challenge is trying to run faster just to stand still,” he says, but reiterates that he is excited to be part of the category’s strong recent performance. “I believe we have a very good product and I think it has plenty of opportunity for further growth in the future,” he says.

Walsh Mushrooms is removing PVC film from its packs of mushrooms as part of a sector-wide initiative to move away from the troublesome single-use plastic by the end of the year. According to Wrap, PVC packaging is problematic because it is not recyclable and also contaminates plastic which could otherwise have been recycled.

The supplier has also developed various cardboard punnet options, one of which is currently being used by recipe box provider Gousto. “We have a solution but it’s quite an expensive one at the moment, and the retailers aren’t in a position to pay for it at,” says O’Leary. Nevertheless, the supplier has worked with packaging manufacturers to increase the percentage of recycled material used in its plastic punnets and reduce the content of virgin plastic to around 20 per cent.