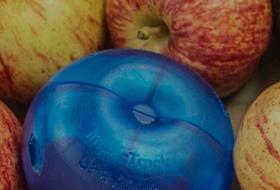 With the rise of automation in the packhouse, UK-based Brillopak, one of the leading innovators in fully automated fruit picking and packing lines, has turned to the “electronic apple” to demonstrate the effectiveness of its machines.

Brillopak used Martin Lishman’s ImpacTrack, a shock sensor encased in a shape that mimics real produce, to show that its systems do not damage the fruit and can help to reduce customer wastage costs and improve line efficiency.

The ImpacTrack can be linked up with a smartphone or tablet via Bluetooth, so the data can be seen in real time to show potential sources of damage.

Using the ImpacTrack apple shape, Brillopck tested its reject system, an advanced automated system that scans a flow-wrapped pack of apples and rejects the pack if one of the apples fails to meet the requirements.

The test found that when apples were pushed off the conveyor belt, some sustained bruising, making them unsuitable for repacking.

Brillopak were then able to design an alternative reject system with a shallower angle using a flexible polyurethane band pusher, significantly reducing the impact and allowing many more apples to be repacked.

“The ImpacTrack allowed us to pinpoint where the maximum force was,” explained Peter Newman, Brillopak’s technical director. “Armed with that knowledge, we were able to redesign the system to reduce that force below the damage threshold. This is a major benefit to fresh produce packers, for whom waste as a result of bruising is a considerable and largely avoidable cost.”

Brillopak is also using ImpacTrack to monitor its pick-and-place systems to avoid damage from robots dropping fruit. The company has reportedly developed a control system that optimises acceleration and deceleration to minimise the risk.

“When lifting a pack of apples, the robot arm accelerates strongly upwards into a curve, then decelerates down into the crate, so the pack is tightly controlled as it reaches the bottom of the crate,” said Newman. “What sets us apart is our ability to perform this task at high speed without bruising the product.”

Through its tests with ImpacTrack, Brillopak is able to demonstrate the careful handling of its automated systems.

“The use of ImpacTrack to help test automated packing lines such as this is a big step forward for us,” said Gavin Lishman, managing director of Martin Lishman. “Continuous research and development is key to making the food industry more efficient and sustainable. Agri-tech solutions such as this help maximise the efficiency of food production. The information obtained by ImpacTrack offers reassurance to not only Brillopak, but also the end users of their machines.'

Martin Lishman is rapidly expanding the ImpacTrack shape library according to customer requests, with more than 20 currently available, each with the shape, size, weight and density of the real produce.