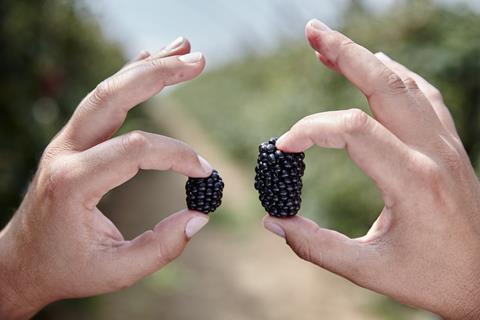 Warm, dry weather in the past two months has made this season’s shop-bought British blackberries some of the sweetest, largest and highest quality that producers have ever seen.

By contrast, hedgerow blackberries have suffered, appearing earlier and smaller than usual following dry summer conditions across much of Britain.

The hot weather has caused hedgerow fruit to ripen rapidly, which has stunted its growth and resulted in smaller and less juicy blackberries than in previous years.

The reason for the difference in quality is that shop-bought blackberries have been bred to consistently crop bigger, sweeter, and juicier berries, whereas hedgerow blackberries comprise around 300 wild sub-species delivering varying degrees of sweetness and bitterness. This means that even in good years, hedgerow harvesting is potluck compared with the more guaranteed quality of the blackberries found in supermarkets.

New-season blackberries on supermarket shelves taste far sweeter and are typically five times the size of their hedgerow counterparts, according to agronomists working with industry body British Berry Growers, which represents 95 percent of berries supplied to UK supermarkets.

Due to the high temperatures in July, which were 1.3 °C above the forecast long-term average, 79 per cent more shop-bought blackberries were estimated to have been available in the first week of August compared to the same week in 2021.

Nick Marston, chairman of British Berry Growers, the industry body that said: “New season shop-bought British blackberries look amazing and taste delicious. They can be eaten and enjoyed just as they are – there’s no need to be limited to crumbles with these beauties!

“A handful of blackberries can provide half of an adults recommended daily allowance of manganese, which is important for bone development and nutrient absorption. According to scientists, they’re also high in salicylic acid and contain astringent tannins which are great for your skin and oral hygiene respectively.

“Research has also found that blackberries possess anti-inflammatory properties – which could help with wound healing.”

Thanks to advances in growing techniques, the commercial British blackberry season now runs for 42 weeks a year, and last year Brits bought 2,576 tonnes of British blackberries, the weight of 208 London double decker buses.

There are over 60 blackberry recipes available on the Love Fresh Berries website.