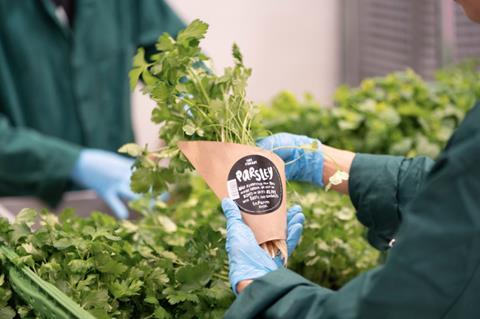 Whole Foods Market customers in the UK will soon be able to purchase a range of fresh produce grown by Infarm, which claims to be the world’s fastest-growing urban farming network.

As part of its continued UK expansion, the Berlin-based company will install its modular vertical farming units in two of the retailer’s London stores – High Street Kensington and Fulham – so shoppers can buy fresh produce that has been grown in store.

Infarm produce will also appear in Whole Foods Market stores in the capital at Piccadilly Circus, Stoke Newington, Richmond, Clapham Junction and Camden at the end of October and during November.

These stores will be supplied with produce from a local Infarm growing centre in Tottenham, the company said, providing flexible supply as and when required.

For Whole Foods Market shoppers, the Infarm range will include herbs such as coriander, parsley, basil, mint, dill and Thai basil, as well as a number of different fresh lettuce varieties.

“The partnership between Infarm and Whole Foods Market aims to satisfy increasing consumer demand for sustainably grown products with a smaller environmental footprint, helping customers to both make healthy choices and reduce their food waste,” said a spokesperson for Infarm.

The company recently raised US$170m in series C funding, further boosting an expansion strategy that has seen it land retail partnerships in the UK, US, Canada, France and Germany. Fruitnet understands it will soon be making its market debut in Japan.

The expansion comes as retailers look to find innovative ways to combat climate change. “Infarm units use 95 per cent less water and 90 per cent less transport than traditional agriculture, as well as 75 per cent less fertiliser and no pesticides,” the spokesperson added.

The first harvest from Whole Foods Market Kensington is scheduled for 19 November.

Daniel Kats, vice-president of corporate sales at Infarm, commented: “Whole Foods Market felt like a perfect fit for Infarm. Its commitment to providing customers with vibrant, sustainable food aligns with our goal of growing produce locally and, in the process, substantially reducing food waste and the environmental impact of what we consume. We hope that in installing our modular farms in Kensington and Fulham, we can help to educate shoppers about the future of food.”

Jade Hoai, director of purchasing and operations at Whole Foods Market, said: “We are excited to partner with Infarm to offer a truly hyper-local selection of greens and herbs across all of our London stores. Whole Foods Market customers can expect to find fresh, unique herbs from Infarm’s vertical growing units like Boudreaux purple basil, that are grown locally, have no pesticides, and use a fraction of the traditional resources required to grow. We are excited about this relationship for its joint commitment to environmental stewardship and for the delicious, nutritious meals our customers will be crafting at home.”

Founded in Berlin in 2013 by Osnat Michaeli and the brothers Erez and Guy Galonska, Infarm is dedicated to creating a future where local super fresh produce is available for everyone. The farms are placed in various locations in the city, like supermarkets, restaurants and distribution centres, so that vegetables grow and are harvested close to the moment of purchase or consumption.

Infarm farmers visit the store after each growth cycle to add new seedlings to the farm. According to the company, the plants retain their roots post-harvest to maintain exceptional flavour and freshness, meaning they’re still alive when harvested.

“These controlled, growing environments are connected to a central cloud-based farm-brain which gathers more than 50,000 data points through a plant’s lifetime, allowing the platform to learn, adapt and improve itself constantly, so that every plant grows better than the one before,” it adds.

“This modular, data-driven, and distributed approach — a combination of big data, IoT, and cloud analytics, in addition to rapid growth at a global scale — sets Infarm apart from any other urban, farming solution.”

During last week’s FPJLive conference organised by the Fresh Produce Journal, Infarm’s UK operations director Jeremy Byfleet confirmed the company was investigating the possibility of expanding its product offer beyond leafy salad vegetables and herbs to include a number of other fresh fruit and vegetables.

Enjoyed this free article from Eurofruit Magazine and its team of editors? Don’t miss out on even more in-depth analysis, plus all the latest news from the fresh produce business.Subscribe now to Fresh Produce Journal.