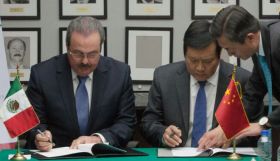 Mexican-grown berries, avocados, papayas and melons are among the products that stand to benefit from a new airfreight service linking Guadalajara in the state of Jalisco to the Chinese province of Henan.

Enrique Martínez y Martínez of the Secretariat of Agriculture, Livestock, Rural Development, Fisheries and Food (Sagarpa), signed a memorandum of understanding with Henan’s vice-governor, Zhao Jiancai, to operate the service, dubbed the Henan-Guadalajara Sky Bridge in the Mexican city earlier this week.

Martínez said it ushered in “a new era of cooperation and commercial exchange between the two countries”.

Prior to the convention being signed, a delegation of Chinese officials and importers visited Guadalajara airport to view the facilities first hand. More than 48,000 tonnes of perishable products are exported through the terminal every year to Europe, Asia and North America/

Located in central China, Henan has 106m inhabitants and serves as a hub for a further 700m people in 91 Chinese cities, giving Mexican producers unprecedented access to the region. Its airport handles some 400,000 tonnes of perishables a year and this is forecast to rise to 1m tonnes by 2020.