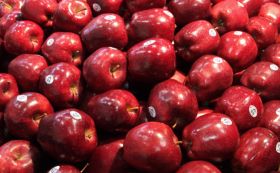 Red Delicious apples from the US could be heading to Australia

Australia’s Department of Agriculture and Water Resources will begin an import risk analysis for US apples.

The task will involve a scientific evaluation of the biosecurity risks and potential import protocols for apples from Oregon, Idaho and Washington, the three US states that make up what is commonly known as the Pacific Northwest region.

Phil Turnbull, chief executive of Apple & Pear Australia, said the peak industry body would lead an industry response to the risk analysis to ensure its members are protected. This will include engaging a biosecurity expert to conduct an independent investigation of the risks on behalf of the apple industry.

“One of Australia’s greatest assets is that it is largely free of the pests and diseases of many other apple and pear producing countries. Protecting this biosecurity status requires fresh produce imports to meet robust biosecurity protocols,” Turnbull said.

The analysis comes following a direct request by the US Government. As a World Trade Organisation member, Australia has an obligation to consider all import requests and develop import conditions that are scientifically justified and do not restrict trade.

US apple exporters are looking to diversify their supply portfolio after trade impasses with a number of key markets over recent months, including China and India.