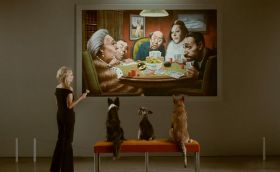 A teaser for Avocados from Mexico's 2019 Super Bowl ad

It seems guacamole is once again on the menu after Mexican grower-exporter association APEAM assured that there would be no disruption to avocado supplies for the championship game between the New England Patriots and Los Angeles Rams, which takes place on 3 February in Atlanta.

The association said shipments are expected to reach a new record, with more than 1,300 trucks loaded per week to ensure that there is no shortage ahead of the big game.

Earlier this month, fuel shortages in Mexico, especially in Michoacán, had put supplies of avocados to the United States in jeopardy.

The shortage was caused by a major crackdown on fuel theft by newly-elected President Andrés Manuel López Obrador. Last month he announced plans to shut off major oil pipelines until the can be protected from illegal tapping, but this led to disruption in supplies as distribution switched from pipelines to tanker trucks.

The 30-second spot – the jewel in the industry’s multi-million dollar annual marketing campaign – features Broadway legend Kristin Chenoweth and a trio of dogs.