US companies to grow gene-edited strawberries 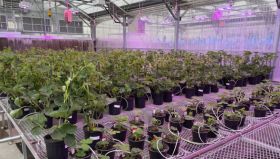 JR Simplot, the Idaho company that successfully brought genetically modified potatoes to the US market, has teamed up with California-based plant breeding company Plant Sciences to grow strawberries they say will stay fresh longer and have a longer growing season.

The two privately-held companies said they expect to launch the first commercially available, gene-edited strawberries within a few years.

US growers produced US$2.2bn of strawberries in 2020, mostly in California, according to the US Department of Agriculture. But consumers discarded an estimated 35 per cent of the crop due to spoilage.

Simplot and Plant Sciences officials said genetically modified strawberries will help reduce waste, and make them available to consumers for longer during the year.

The strawberries will contain genes from only strawberries, selecting desirable traits that have been cultivated over decades.

“It's the same technology we're working on with potatoes,” said Doug Cole, director of marketing and biotech affairs at Simplot. “We have the opportunity to do that with this technology.”

Simplot has previously used the gene-modifying technique, approved by the US Environmental Protection Agency and Food and Drug Administration, to develop Simplot potatoes, which are sold in some 40 US states and 4,000 supermarkets and 9,000 restaurants throughout the US.

Cole said the company submitted information to the Agriculture Department that determined the gene editing being used on strawberries replicates a natural process and doesn't need regulatory approval before the strawberries are brought to the market.

Steve Nelson, president and chief executive officer of Plant Sciences, said the company over the last 35 years has developed five distinct breeding populations of strawberries that do best in various growing areas and climate types.