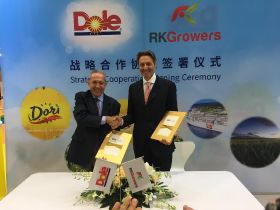 Dole has been the exclusive agent of RK Growers in China since 2018, and together they have worked relentlessly to promote and market the new Italian Dori golden kiwifruit, the companies explained at the Hong Kong event.

“A strong sales network and strict control over all aspects of the supply chain are important reasons why RK Growers chose Dole as a strategic partner,” Paolo Carissimo, president and managing director of RK Growers, said in a speech at the signing ceremony.

“Both Dole and RK Growers is looking forward to the sales of Dori in the upcoming season in China.”

Witnessed by Terry Chan, general manager of Dole China, as well as a number of senior Dole and RK Growers senior executives, Toman and Carissimo signed their strategic agreement at a grand ceremony on the opening day of AFL in Hong Kong.

Dole has actively participated in AFL since the first exhibition, and this year brought together high-quality products from various Asian markets to its stand at the show.

“In addition to the competitive products such as banana, pineapple, dried fruit and canned fruits from the Philippines, there are also Fuji apple, soft-seed sweet pomegranate and non-GMO corn, Fengshui pear from China; honey pomelo from Thailand and dragon fruit from Vietnam,” the company said.